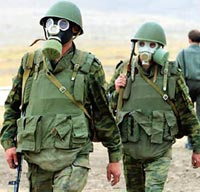 An Israeli research chemist, who is suffering from cancer, has alleged that his disease was triggered by unsafe conditions at a chemical warfare laboratory where he worked as a young soldier. Avi, a doctor of chemistry, now wants the army to pay him compensation. During the 1980s, Avi undertook three years of compulsory military service as a research technician in the top-secret laboratory. The laboratory developed methods of decontamination, detecting poison gas and testing the effectiveness of protective clothing, Avi said. But he claims that the other technicians and scientists working there with carcinogenic materials were never briefed on safety. "Because we were never told, we did not take the necessary precautions. As a result, we were exposed quite unnecessarily," he said, adding, "The commander was more concerned with field security (secrecy) than with safety."