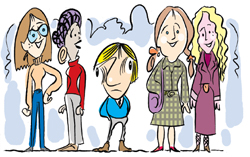 imbalances in sex ratio around the world have been attributed to a variety of reasons. Scientists have now found more evidence of a link between chemicals like polychlorobiphenyls (pcb) and a decline in the birth of males.

Over the years scientists and communities have descerned a peculiar trend. The Aamjiwnaang community near Sarnia in Canada have, for example, voiced concerns over the declining male population in the community. Their observation was confirmed in a study by Ottawa University in 2005.

It is noted that very few males are being born in colder parts of the Northern Hemisphere and in the Arctic. Studies have linked this to the influence of chemicals, chiefly pcb, on the reproductive cycle. pcb, which is used in refrigerators and other electric equipment, gets disbursed in the environment and enters the human body through food chain.

There is now further proof of the imbalance and the role of pcb in it. In a yet-to-be published study, scientists from the Arctic Monitoring and Assessment Programme (amap) studied 480 families in Greenland and Eastern Russia. They said an increase of man-made chemicals in women's blood is linked to the gender imbalance in babies. The scientists found high levels of ddt and other organic pollutants in the blood of the people studied. They found that over 65 per cent of home-made local food contained pcb and ddt. "The main chemical in question is pcb," confirmed Lars-Otto Reierson of amap.

Chemicals like pcb enter women's blood and mimic female hormones, which affect the functioning of the sry gene on the y chromosome. This gene controls the development of male characteristics. Without proper hormonal cues, even genetically male fetuses develop along the default female pathway.