Chemistry Nobel for discovery of receptors that help cells respond 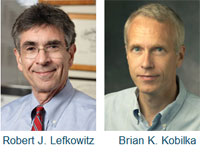 The Nobel Prize in Chemistry 2012 has been awarded to American scientists Robert J Lefkowitz and Brian K Kobilka for their groundbreaking work on a particular class of molecules found in cells that help them make sense of their environment and respond.

Lefkowitz, a senior scientist at Howard Hughes Medical Institute and Duke University Medical Center and Kobilka, professor in the department of molecular and cellular physiology and medicine at Stanford University School of Medicine in the US, discovered a family of receptors called G protein-coupled receptors (GPCRs).

The findings are important for developing better drugs as half of the drugs available over the counter, including most of the top sellers, target these receptors to exert their effect.

The human body contains around 1,000 GPCRs. Around 50 per cent of these receptors are present in the olfactory system and help in identifying various types of smells. Around one-third transfer messages from hormones and signalling substances, such as dopamine, serotonin, prostaglandin, glucagon and histamine. Some of these receptors are also present in the eye and the tongue.

While it became clear to scientists long back that hormonal glands, such as adrenal that stimulates the heart and triggers the flight or fight response, exert their effect through receptors, their structure and mechanism of action eluded them.

In the late 1960s, Lefkowitz used radioactive iodine to trace receptors. He attached the iodine with a hormone molecule. When this hormone bonded with the receptor it helped him trace its activity. Because of his fascination with heart diseases, Lefkowitz started to study adrenal gland–which stimulates the heart–and discovered a receptor for adrenalin (hormone secreted by adrenal gland): β-adrenergic receptor. “His team of researchers extracted the receptor from its hiding place in the cell wall and gained an initial understanding of how it works,” noted the Royal Swedish Academy of Sciences, the body that gives out the award.

In the 1980s, Lefkowitz hired the brilliant doctor Kobilka who focused his research in identifying the gene that codes for β-adrenergic receptor. “The newly recruited Kobilka accepted the challenge to isolate the gene that codes for the β-adrenergic receptor from the gigantic human genome. When the researchers analysed the gene, they discovered that the receptor was similar to one in the eye that captures light. They realised that there is a whole family of receptors that look alike and function in the same manner,” the Academy added. “Today this family is referred to as G-protein–coupled receptors.” Kobilka later joined Stanford University to study the structure of GPCRs.

Amitabha Chattopadhyay, outstanding scientist at Centre for Cellular and Molecular Biology, Hyderabad, who heads one of India’s leading research groups on GPCRs, hails Lefkowitz as the pioneer of GPCR research. “While Lefkowitz started the field, Kobilka perfected the technique to precisely examine the structure of these molecules,” he adds.

However, GPCRs are present in cell membranes which contain a lipid solution. “GPCRs don’t dissolve well in lipid solutions and do not crystallise easily which makes it difficult to study them.” ‘It is here that Kobilka developed an improved method to take structural images of activated GPCRs,” says Chattopadhyay. In 2011, Kobilka’s group published a crystallographic snapshot of GPCR in action – a result that was hailed as pathbreaking.