A requiem for the nuclear plant 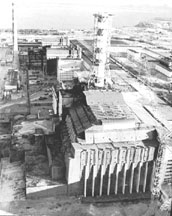 the Chernobyl nuclear power station in Ukraine has been officially closed down -- 14 years after the plant exploded and sent a cloud of radioactive dust over Europe. The country's president, Leonid Kuchma, gave the order to shut down the plant permanently, saying the world would now be a safer place.

On December 15, Chernobyl chief Oleksandr Yelchishchev turned the black az switch, activating the automatic safety system. Within seconds, a dial showed the reactor's output dropping to zero. This simple procedure closed a facility that has become synonymous with nuclear fears. It was in 1986 that a fire engulfed reactor number four in the same building and triggered the world's worst nuclear disaster.

More than 4,000 Ukrainians who took part in the hasty clean-up effort since the 1986 disaster have died and 70,000 were disabled by radiation, according to government figures. About 3.4 million of Ukraine's 50 million people, including some 1.26 million children, have been affected. "This decision came from our experience of suffering," said Kuchma. "We understand that Chernobyl is a danger for all of humanity."

There is no decision, however, on how to treat the tonnes of radioactive dust and nuclear fuel inside, and work on making the structure environmentally safe will take decades.