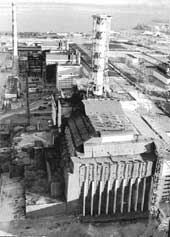 ukraine's Chernobyl nuclear plant will be closed down permanently from December 15, 2000. "It's a political decision and the closing of the plant would be a historic event," Ukraine's president Leonid Kuchma said. ekor , a newly developed silicon polymer coating will be used to 'seal' the nuclear waste and prevent radioactive contaminants from leaking. During an initial test in August 2000, ekor proved to be successful. It was for the first time that a substance applied to contain radiation from the nuclear fuel did not disintegrate after three or four months of application on the nuclear fuel. This convinced the government to use ekor for sealing the plant. At least six per cent of the country's energy requirements are met by the plant.

The country will get us $393 million as compensation from the European Union and others, to finance an alternative to the plant. The aid has been given on the condition that Ukraine will take various steps to reform its energy sector "by privatising energy distribution companies and introducing energy efficient technology."