Child malnutrition is down: survey

Prevalence of underweight children down from 76  to 43 per cent for boys, 74 to 42 per cent for girls over past  four decades, says National Nutrition Monitoring Bureau 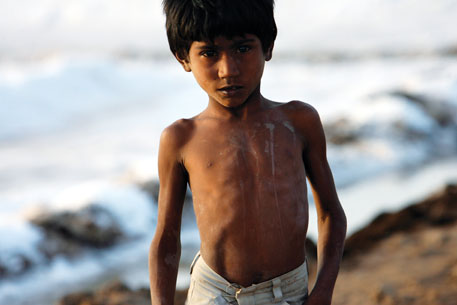 Food intake of people in rural India has been declining over the past four decades, but the status of nutrition among children has improved over this period. This was revealed in third repeat survey by National Nutrition Monitoring Bureau (NNMB), which shows other factors—poor hygiene and access to clean water, for instance—also had their role in poor nutrition status of people.

The NNMB survey conducted to find out time and trends in the diet and nutritional status of rural population in 2011-12, highlights that the prevalence of underweight, stunting and wasting has been declining in the past four decades. It shows that there is reduction in the prevalence of underweight children from 76 per cent to 43 per cent among boys and 74 per cent to 42 per cent among girls.

Food and nutrient intake in general has decreased
This is the third repeat survey among rural population which shows that food intake per household has decreased in the past four decades. The intake of cereals and millets has declined by about 137 gram over a period of four decades.

Nutrient intake has also decreased in general.  The average intake of energy has declined by about 500 kilo calories per consumer unit per day (Kcal/CU/day) over the period. The states where this decline in consumption is highest are: Karnataka with 885Kcal, followed by Maharashtra with 713 Kcal, Andhra Pradesh with 522Kcal, Tamil Nadu with 462 Kcal, Kerala with 353 Kcal, Odisha with 268 Kcal and Gujarat with 218 Kcal.

The intake of protein has declined by 13 gram per consumer unit per day (g/CU/day) over a period of time in all the states except Kerala, where it increased by four gram. The intake of calcium decreased by 173 milligram (mg) and the deficit ranged from a high 453 mg in Karnataka to a low six mg in Kerala. There was an increment of 70 mg in Odisha. The intake of other nutrients, such as iron, thiamine and riboflavin also decreased over the period.

Intake of nutrition among children has also not shown any increase. Among, one to three-year-old children, average intake of cereals and millets has decreased from 158 gram in 1975-79 to 131 gram in 2011-12. There was increase in 1988-90 but the trend did not pick up. The mean intake of pulses and legumes, vegetables, fats and oils and other flesh foods increased by one to six gram in the past four decades. For this category of children, consumption of all other foods decreased marginally over the same period, except that of milk and milk products.

In the case of children aged four to six years, the average intake of cereals and millets decreased from 228 gram in 1975-79 to 209 gram during 2011-12 after an initial spurt. Intake of vegetables increased by 18 gram, fats and oils by three gram, milk and milk products by 10 ml and other flesh foods by three gram. The intake of other foods decreased over the same period.

It clearly shows health of children is as starkly associated with energy consumption as it is perceived. Few other factors like sanitation might play significant role in the healthy development of children.

Hygiene and nutrition
The survey points out that the improvement in the nutritional status of the individuals improved despite decline in the food and nutrition intake. It says that it could be attributed to non-notional factors like increased access of safe drinking water, personal hygiene, environmental sanitation etc.