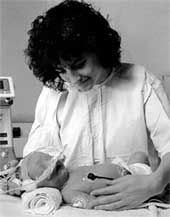 air pollution can impair the development of the heart in children, reveals a study carried out by researchers University of California and the California Air Resources Board.

Women residing in polluted areas are three times more likely to have children with birth defects than those living in less polluted areas. This effect of pollution was found more pronounced when the mother was exposed to the polluted air during the second month of pregnancy. Carbon monoxide and ozone are the main culprits responsible for these defects.

The researchers evaluated 9,000 babies having birth defects using data from the California birth defects monitoring programme. The defects pertained to different parts of the heart such as valves, septum and arteries. The control group consisted of children who were not diagnosed with any birth defects in the first year of life. The team calculated the average monthly exposure to pollutants such as carbon monoxide, ozone, nitrogen dioxide and particulate matter. "The fact that certain heart defects are turning up in the second month of pregnancy when the heart is being formed suggests something serious may be happening," says Gary Shaw of the California birth defects monitoring programme and a coauthor of the study. During the second month of the child's development, the neural crest cells differentiate to form the heart. These cells are easily affected by exposure to toxic material because they lack anti-oxidative stress proteins and are therefore more sensitive to oxidation by the pollutants. Unlike other health factors like diet or lifestyle, a pregnant woman has almost no control over the quality of air she breathes, he adds.

The group agrees that the results are inconclusive and more work has to be done to confirm the results. "We're not sure carbon monoxide is the culprit because it could be just a marker for something else in tailpipe exhaust," says Shaw. The study also suggests that our understanding of the effect of air pollution on health might be incomplete. "There has been a big reduction in the levels of pollutants like ozone and carbon monoxide but other pollutants which we do not measure routinely might be posing a health risk," says Beate Ritz, associate professor department of epidemiology, school of public health, University of California, Los Angeles. The group also did not take into consideration, possibilities such as occupational exposure, vitamin supplement use, diet, obesity and maternal smoking. Change in residence during the gestation period was also not taken into consideration.

"Studies like this one on air pollution give us critical leads to follow-up with further research," says John A Harris, chief of the California Birth Defects Monitoring Program. The group now plans to repeat the study using data from 1993 onwards. Detailed demographic, socioeconomic, and medical information on the mother would be collected.