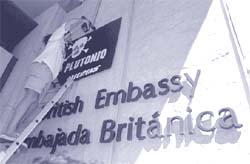 The Chilean government has objected to the passage of a ship carrying French-processed nuclear waste to Japan through Cape Horn. The vessel 'Pacific Swan' -- owned by a unit of British Nuclear Fuels -- is loaded with 76.8 tonnes of vitrified spent fuel, a highly radioactive product. The ship is expected to arrive in Chile in the middle of January.

"We are upset about this and we will do everything possible to avoid this kind of transport off our coastline," said Luis Winter, director of foreign policy in Chile's foreign ministry. But he says that there is little the Chilean government can do as this type of cargo is permitted under international law. "As the governments of Panama and the Caribbean countries were against the move, the shipping company decided to use the Cape Horn route," said a government press statement.

The Chilean government said that it is working with the un International Atomic Energy Agency to formulate laws that will define responsibilities of the parties involved for environmen-tal damage caused by accidents involving radioactive material.