What is 'FD' the two X chromosome-bearing young boy - one of nature's accidental freaks, something akin to the mythical chimaera, or thefirst reported case of parthenogenesis in mammals? 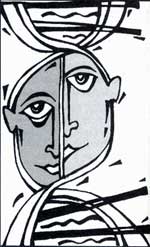 THE chimaera - in Greek mythology - is a beast with the head of a lion, the body of a goat and the tail of a snake. Biologists use the word to refer to something no less exotic: an organism whose tissues have two or more genetically different origins.

Theoretically, chimaeras could arise when the egg nucleus - which has half the normal complement of genes of the adult (n instead of 2n) - divides once before fertilisation. Of the two daughter nuclei, one might get fertilised by a sperm (resulting in a 2n nucleus, with an equal genetic representation from both parents) and the other might divide once again (resulting in a 2n nucleus where all genes come from the mother).

This is what may have happened in the case of a three and a half-year old boy (identified only as ED), as reported in Nature Genetics (Vol 11, 1995) by L Strain and her colleagues from the University of Edinburgh, UK. A blood test of the boy had revealed that he had two x chromosomes: the blood was characteristic of a female, not a male (who has one x and one Y chromosome).

The Findings, although limited owing to the lack of information on the genetic make-up of all of ED'S tissues, excite interest on more than one ground. Firstly, the child is the first human chimaera reported. Secondly, he is normal, except for a left-right facial asymmetry and a small testes; he is also reported to have exhibited aggressive behaviour in early childhood. ED, who is left-handed, raises the prospect that parthenogenesis (being born from a single parent - most often only the mother) in mammals may not be as unlikely as was thought, The reason embryologists consider parthenogenesis impossible in mammals is because of the phenomenon of genetic imprinting - which means that the same gene in your body can behave differently depending on whether you got it from your father or your mother.

As a result of imprinting, we need one copy each of a paternal and maternal gene. if we possessed two identical genes that are also similarly imprinted, as would happen if we had a father but no mother (or vice versa), development would be haphazard; abundant evidence from mice testifies to this. But results of the tests on ED show that in terms of his blood, his genes lack a father. Could it be that nature allows mammals to get away with a little bit of parthenogenesis?