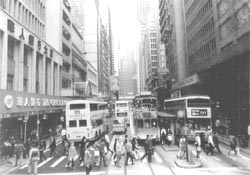 To combat air pollution, Hong Kong is going to make some areas of its busy commercial districts into traffic-free zones. Starting from later this year, vehicles will not be allowed to ply in several major roads as per the recommendations made by the transport ministry. The plan would cover popular districts such as Lan Kwai Fong and SoHo, as well as parts of the busy Queen's Road. Hong Kong's air pollution has become a major concern in recent years. When air pollution levels increase, many areas in Hong Kong are enveloped in a thick blanket of haze that reduces visibility. The Hong Kong government, in the past, has urged people with respiratory and heart problems to stay indoors whenever the pollution index rises above 100. In November 2000, the penalty for polluting vehicles was raised from us $58 to us $128.