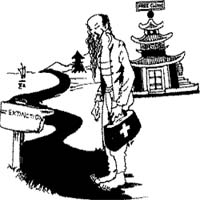 Rural health care system in China has disintegrated, increasing the cost of treatment by 400-500 per cent from 1990 to 1997, states a United Nations report. Healthcare in several rural areas is so expensive that residents suffer from chronic infections and risk childbirth at home. They have stopped seeing doctors except in extreme emergencies. Health statistics are beginning to reflect the grim situation. The number of tuberculosis cases has quadrupled in 15 years. After a gap of four decades, infant mortality has also been reported among poor people.

The collapse of the traditional system of medicine is cited as one of main reasons behind many families falling in the 'below poverty line index'. The once-prevalent system of 'barefoot doctors' and free rural clinics has ceased to exist because of socio-economic changes.Subsidies for social services like health and education have been withdrawn, hoping that local governments would be able to provide such services. But this has left the rural community at the mercy of expensive private hospitals and clinics. A classic example is treatment for cold, which amounts to two months' income for some families and giving birth in a hospital can expend two years of hard-earned cash. "China is not achieving its own basic health criteria," said Zhu Ling, an economist at the Chinese Academy of Social Science.