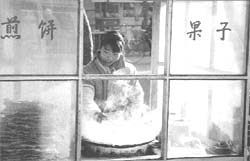 Urban dwellers spend 80 per cent to 90 per cent of their time indoors in an environment that is dangerous to their health, according to Cui Jiusi, a Beijing environmental scientist. Cui, director of the Air Quality Monitoring Laboratory under the Chinese Academy of Preventive Medicine, recently cited health dangers resulting from indoor air pollution. The pollutants include formaldehyde and airborne particles, Cui said. The laboratory reached the conclusion after studying indoor air quality data collected during the past 12 years. Recent statistics from Beijing's Chemical Poisonous Substances Test Centre indicate that more than 400 poisoning accidents reported annually are the direct result of indoor air pollution caused by construction and interior decoration materials.

The problems for China are not just restricted to air pollution. It is also facing its worst drought since 1980. Almost 8.7 million hectares of farmland have been affected by the drought, reported Xinhua , the official Chinese news agency . The agency was quoting officials at the state flood control and drought relief. This drought comes close on the heels of a record summer flooding, which affected a large part of China barely a year ago.

According to reports, some 19 million people were short of drinking water. The government had already spent us $1.14 million on drought relief measures, while the drought control headquarters had dispatched 13 expert groups to arid regions to help coordinate relief efforts there.