The Chinese people may resent the restrictions, but the government has to crack down on trafficking in products from rhinos and tigers or else suffer US trade sanctions. 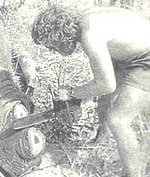 CHINA -- one of the world's largest markets for tiger and rhinoceros parts -- has imposed a ban on the trade of rhino horns and tiger bones. These substances are no longer to be used in medicines, though the ban will be delayed by six months to allow liquidation of existing stocks.

The restrictions will, however, be deeply resented for products derived from both animals are believed to be capable of healing and invigorating the body and are essential ingredients in traditional Chinese medicine.

The ban has been imposed in response to a threat from the US that it would impose trade sanctions on China and Taiwan, unless they put an end to trafficking in rhinoceros horns and tiger bones, claiming it endangered both animals.

Since 1981, China has been a member of the Convention on International Trade in Endangered Species, which forbids trade in these products, and had restricted their use, but the measures were not strictly enforced.