China is on a high 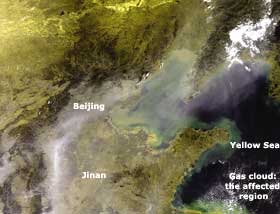 increasing economic growth has raised the levels of atmospheric nitrogen dioxide (no2) over the industrialised northeast China to the highest in the world, according to a new study of satellite images. no 2 levels from the ground to an altitude of 10 kilometres, are about 50 per cent higher than earlier bottom-up estimates, and are continuing to increase, it says.

Previous calculations used figures for the amount of fossil fuels burnt to gauge the amount of no2 released. But researchers at the University of Bremen, the Max-Planck Institute of Meteorology in Hamburg and France's Centre National de la Recherche Scientifique used satellite images from the Global Ozone Monitoring Experiment (gome) on ers-2, and Envisat's Scanning Imaging Absorbing Spectrometer for Atmospheric Chartography (sciamachy).

gome generated the first satellite data on no2 levels, which it mapped from 1996 to 2002 (see image: Satellite estimates). These were then matched with the no 2 column readings from sciamachy from December 2003 to November 2004. sciamachy has a higher spatial resolution, and was used to confirm the original gome findings.

The only feasible reason for these levels of no2, say the researchers, is the rapid economic growth that has occurred in China over the past decades.

The major mechanism for the formation of no2 is the oxidation of nitric oxide, which is produced by most combustion processes. The increase in industry, and number of vehicles on the roads (see 'Chinese bicycles reach dead end', Down to Earth, September 30, 2005) would mean increasing amounts of nitric oxide produced.

The findings, published in the journal Nature (Vol 437, No 7055, September 1, 2005), also show a substantial decrease in no2 levels over parts of North America and Europe.