China to observe 'no-car day'; parking fee to be hiked 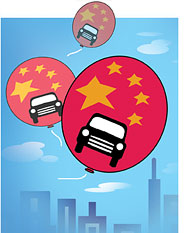 chinese cities will join the growing band of urban centres around the world to observe 'no-car day'. A Chinese news agency reported that on September 22 automobiles will not be allowed along selected corridors in about 100 Chinese cities, including Beijing and Shanghai. People will be encouraged to use public transport, instead. The measure is a part of the government's drive to check the quality of ambient air.

It was also reported that Beijing adds about 1,000 new cars a day and the transport sector consumes 20 per cent of the city's energy. The city has about 2.8 million vehicles and is likely to cross the 3-million mark by 2008.

Keeping in mind the 2008 Olympics, Beijing's municipal authorities, last year, decided to keep 0.8 million private and government automobiles off the road between November 4 and 6. The results were remarkable, researchers said.Researchers at Harvard university and Royal Netherlands Meteorological Institute, found that it helped the city get rid of 40 per cent of its nox levels.

The emission reductions consequent upon the traffic restrictions has encouraged the government to 'go green' by putting into practice green transportation policies.

Meanwhile, in another decision, authorities in Beijing have said that they will increase downtown parking fees by 150 per cent to discourage motorists from driving into the congested city centre. Motorists will now need to pay five yuan (us$0.6) per hour instead of two yuan (us$0.25) for parking close to downtown commercial areas, said an official of the Beijing Municipal Reform and Development Committee.

The price hike will be implemented later this year. Authorities are, however, planning to build more and cheaper parking areas in the suburbs to further decongest the city centre.