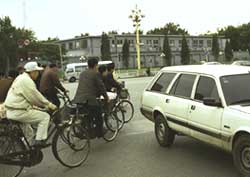 The cyclist, who has ruled Chinese streets for decades, is fast becoming an endangered species in the country, thanks to sweeping globalisation. Shenzhen China Bicycle Company, one of the biggest bicycle manufacturers and the biggest bicycle exporter of China, is facing bankruptcy. Due to increased competition for export sales and a dip in the domestic market with more people buying automobiles, the company failed to report a profit for five years. Its debt is over us $65.8 million.

The transformation to market-led economy and the accompanying consumerism has led to a rapid increase in demand for automobiles in China. In 2003, the country replaced Germany as the third largest national market for motor vehicles. In 2005, it produced two million cars, up 83 per cent over the previous year. According to China's Association of Automobile Manufacturers, there are now more than 5.3 million additional cars from internal production alone and vehicle sales are expected to rise 15 per cent this year. In Beijing, 1,000 new cars take to the streets every day. In May 2005, there were 2.4 million automobiles in the city. This is in sharp contrast to the fact that Beijing took 48 years to reach the one-million-car mark; the second-million-mark was reached in just six more years.

Before 1980, the state was the sole buyer of vehicles; even upto 1998, government institutions made more than two thirds of vehicle purchases. But the national economy has doubled in size since 1990 and 65 per cent of vehicle purchases were made by families and private individuals in 2004.

Consequently, Chinese cities have witnessed a spurt in air pollution. Over half of them failed to meet national air quality standards in 2004. In Beijing, nox concentrations within the Second Ring Road, which encircles the city centre, increased from 99 microgramme per cubic metre (g/m3) in 1986 to 205 g/m3 in 1997. The Beijing Municipal Environmental Protection Bureau attributes the increase to vehicular emissions, as the amount of coal burned has remained stable for many years.

The Shanghai municipal government tells a similar tale. Before 1992, the annual average concentration of nox in the city was less than 50 g/m3, which complies with the Chinese Class ii air quality standards. But from 1995 to 1997, it increased from 51 g/m3 to 59 g/m3. This coincided with a steady increase in vehicle population. Bicycles were banned completely from some large avenues in Shanghai in 2004. Now, the city's bus operators plan to develop hybrid-engine buses to fight rising fuel costs and cut exhaust emissions.