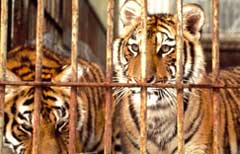 the Chinese government is reportedly rethinking the ban on sale of tiger and its body parts in its domestic markets. China had imposed a ban on domestic trade in 1993, in an attempt to stop the poaching of tigers for use in traditional Chinese medicine. The ban in China has not helped to bring down the international demand for tiger parts. Consequently the tiger population in the wild has come down to an estimated 5000 world over as 90 per cent of tigers have been lost over the past century. Three sub-species -- Bali, Javan and Caspian tigers -- have become extinct in the past 70 years, with just five others remaining. This, despite the fact that tiger is protected by the Convention on International Trade in Endangered Species of Fauna and Flaura, which bans any international trade in tigers or their body parts. With consistent demand both at home and abroad, the Chinese government is rethinking whether to allow the skeletons of dead captive tigers to be used for medicinal purposes.

Conservationists claim that opening up trade of captive-bred tigers will lead to poaching of wild tigers as well, although some believe that a sustainable harvest of farmed tigers will reduce the pressure of poaching. Consequent to imposition of strict penalties in the us and China, the increased illegal demand of tiger parts has led to poaching in several countries. Observers believe that many farms are breeding far more tigers than zoos need as they believe the ban could be lifted. But conservationists claim these farms would only cause harm as tigers will be killed to supply illegal markets beside the legal ones.