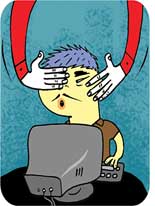 Chinese officials are retreating from their controversial plan to install an internet filtering system on computers in the country. But only somewhat. The country's industry and information technology minister, Li Yizhong, said, "the notion a filtering programme would be required on every new computer was a misunderstanding spawned by poorly written regulations."

He said all public computers in schools and internet cafes must install the filtering software, Green Dam -- but the government "respected the choice of individuals who do not install it".

Wen Yuchao, an influential blogger, said, "Green Dam will be a mini great firewall placed inside every personal computer. The real logic behind it is that China is a big kindergarten in which even adults are treated as children that need to be protected."