A Chinese town of about 100,000 people has been sealed off after a man died of bubonic plague last week. Since then, at least 151 people have been placed in quarantine though none of them have shown confirmed signs of  infection.

Chinese media reports suggest that police have cordoned off the entire town of Yumen in the north-western Chinese province of Gansu and restricted the movement of the residents. “The city has enough rice, flour and oil to supply all its residents for up to one month,” state broadcaster, China Central Television (CCTV) said.

The 38-year-old man contracted the disease from a dead marmot, which is a squirrel-like rodent, he found for his dog. He developed a fever the same day and died in the hospital last Wednesday, said media reports. The Yumen quarantine comes after three new cases of bubonic plague were confirmed in the US state of Colorado June 18. The last plague death in China happened in 2012, according to the Chinese health ministry.

Plague, which is a bacterial disease carried by fleas hosted by rodents, is extremely deadly if not treated immediately.

The World Health Organization says between 1,000 and 2,000 cases of plague are reported every year. The disease today has a mortality rate of 8 to 10 per cent. The last major plague outbreak in China happened in the 1860s, which claimed 10 million lives, according to Centers for Disease Control and Prevention. It says that since 1990, Africa is the only region which has reported regular plague outbursts. 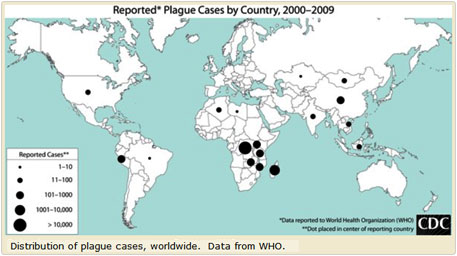