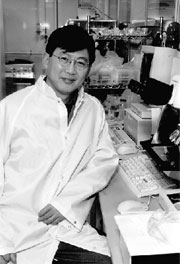 even for the most rich and famous, every penny counts. So is the case with the Silicon Valley that is troubled by the rising cost of making silicon chips. The soaring costs are due to a complicated process known as photolithography which is used for fixing transistors and wires on silicon. Recently a group of electrical engineers have come up with a technique that could be the answer to the valley's woes.

Stephen Chou, Chris Keimel and Jian Gu of the us-based Princeton University claim that it is possible to stamp minute features on to melted silicon, just as a seal is stamped on to softened wax. To perform their trick, which they have dubbed 'laser-assisted direct imprint' (ladi), they first constructed a mould with the desired pattern of shapes on its surface, out of a piece of quartz. Then, they placed the quartz mould on top of a wafer of silicon and press the two together. They then passed a laser beam through the mould to the silicon. This melted a thin layer of the silicon's surface. (The mould was unaffected by the laser beam because the light was not at the right wavelength to excite electrons in quartz's structure). Within 250 billionths of a second, the terrain of the silicon sculpted into trenches, mesas and ridges.

These structures, the researchers found, show an extraordinary level of detail -- far more than it would be possible to create, in a reliable fashion, using photolithography. This is because the minimum size of feature that can be made by photolithography is limited by the wavelength of the light used. The shorter the wavelength, the finer the features -- but only up to a point. Despite the fact that extremely short wavelength ultraviolet light is employed in modern silicon chip factories, engineers think that it will be impossible to sculpt features smaller than 100 nanometres (billionths of a metre) across in this way. When Chou and his colleagues examined their results, however, they found that their technique outstripped the limits of photolithography by a full order of magnitude. It turned out that ten-nanometre ridges present in the quartz mould were transferred intact to the surface of the silicon. Once they perfect the use of ladi to build layered structures on silicon, it may be possible to use the technique to cram 100 times more transistors on to a chip than the present limit allows. Another advantage of the technique is that, unlike photolithography, it involves a one-step process.

However, two obstacles remain to be overcome. First, making a quartz mould with sufficiently small and precise features is hard. But Chou says that electron-beam lithography, which resembles photolithography but uses short-wavelength electrons rather than light, is exact enough to produce a suitably detailed mould. Secondly, to perform ladi on a 300 mm-diameter silicon wafer of the sort used in modern chip factories would require a laser beam of the same diameter. The equipment needed to generate this beam would be both expensive and delicate. Still, the cost could hardly be more forbidding than that of a chip factory capable of building comparable circuits by conventional means.