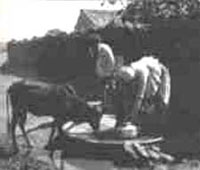 THE ecodevelopment project being prom6ted by the ministry of environment and forests (MEF) and the World Bank (WB) in seven protected areas, has' taised yet another storm regarding the issue of forced relocation. The venue this time is the Gir National Park, the only home of the Asiatic lion in India. It all began when the Saurashtra Paryavaran Samraksha Samiti - a local environmental group - alleged that the forest department (FD) was issuing fresh notices of eviction to the Maldharis, inhabitants of the Gir forests. The Maldharis were given a month's time to move out. The step was ostensibly taken to facilitate the project and Gir is one of the pilot areas under the project. The project's promoters claim that the entire exercise is based on 'voluntary relocation'.

Living in small settlements of four to five households each, called ness, the Maldharis earn their livelihood primarily by rearing livestock and selling milk products. The project area contains approximately 54 nesses supporting a population of 2,500 Maldharis with their 10,000-strong livestock. The Gir forest is also home to some 14 forest settlement villages. According to the Delhi-based Indian Institute of Public Administration's ecodevelopment indicative plan, the residents of these forest villages including the Maldharis, had been given concessions for grazing their cattle in the area. But a 1993 notification declared 115, 342 ha of the area as a national park, a step that has severely curtailed many of the traditional activities of the communities. Over the years, the Maldhari families that have been resettled to new locations have been encouraged to farm. But farming has not caught on in a big way, not only because the land is arid, but also due to the fact that the Maldharis have no previous experience as cultivators. As a result, some of them are now reduced to being wage labourers.

Although local environmental groups claim that they have documentary evidence proving the issue of fresh notices to many families, the FD vehemently denies this. The conservator of forests is reported to have said that the three notices given were directed against 'illegal' residents of the forests, against whom many criminal offens cases had been registered. Another organisation, the Aga Khan Rural Support Programme, has confirmed the follow-up of the issue of relocation. Even the WB appraisal report agrees that relocation is a key issue in Gir and that in the long term, 11 the FD has a voluntary relocation plan for another 361 families presently living in the sanctuary." The ecodevelopment project endorses the blanket rule of no human intervention in a national park, as per the Wildlife Protection Act, 1972. There has neither been an attempt to assess the impact of the people on the ecosystem, nor have the traditional rights of the people been recognised, before embarking on the project.

However, matters seem to have calmed down at present mainly because the media has backed the strong protests from the Maldharis and the local groups working in Junagarh. At a meeting on ecodevelopment in New Delhi on June I - organised jointly by the MEF and the WB - some participants categorically asked the latter for an assurance that no forcible relocation would be attempted in Gir. Although the issue remains unresolved, at least the fact that the FD is 'forcing a choice' on the communities concerned, is crystal clear.