Bacteria can absorb the toxic chemical 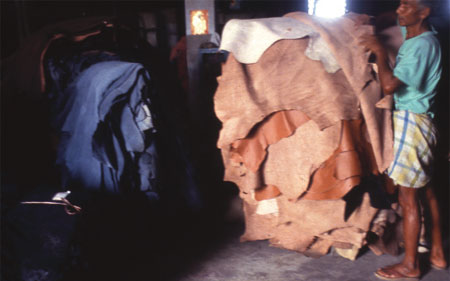 SCIENTISTS around the world have devised various methods to reduce the toxicity of chromium, or Cr(VI), discharged from industries like leather tanning, steel and paints. Used widely in such industries, the heavy metal is a known carcinogen. But the methods have their disadvantages—high cost and energy consumption in complex processes.

Now researchers from Jadavpur University in Kolkata have explored the efficiency of a bacterium, Pseudomonas aeruginosa, in absorbing Cr(VI) from industrial discharge.

Though the concept of using microorganisms to remove chromium from soil and water is not new, P. aeruginosa, has certain advantages. “The bacterium is commonly found in comparison to Brevebacterium casei, Arthobacter and Bacillus species studied for effeciency to remove the metal,” says Kalyan K Mukherjea, lead author of the study. Moreover, it can grow easily in water where the effluents are usually discharged. “This places it above other bacteria,” he adds.

To test the efficiency of P. aeruginosa in removing Cr (VI), the researchers studied biosorption by it in a solution created synthetically and from effluents collected from industries in Kolkata Metropolitan Area, a Ramsar site. Biosorption is the ability of bacteria and fungi to bind and accumulate heavy metals from wastewater. They found that the percentage of chromium absorption marginally varied from 68.75 per cent in synthetic solution to 52.26 per cent in effluent.

Researchers say two groups of proteins—amino and hydroxyl—are responsible for binding chromium on the bacterial surface. They studied changes in the structure of the bacteria, before and after the exposure. Analysis showed that Cr(VI) ions were deposited on the bacterial surface and got reduced to Cr(III), which is a famous nutrient supplement. The bacteria, thus, removed the toxic metal. Maximum absorption of the metal was found at alkaline pH.

The findings of the study were published in the September 10 issue of Current Science. The researchers found that chromium removal in synthetic solution was more on day three, with a gradual decrease on day four. The results from effluent treatment showed no such trend. “The decreasing pattern could be due to high concentration of chromium,” Mukherjea notes. Presence of other metal ions like cadmium also hindered the absorption process in both the cases.

Reviewing the findings, Ashok Kumar, professor of bioengineering and environmental biotechnology at IIT-Kanpur, notes the study sets parameters for biosorption of the heavy metal which will help optimise the clean-up process.