Does the concept of interlinking India's rivers hold water? The debate rages on... 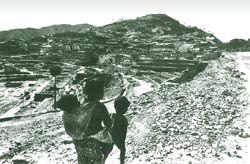 the Supreme Court (sc) has asked the Union government to consider linking the country's rivers within 10 years, advancing the government's own deadline. Earlier, the Union ministry of water resources had filed an affidavit stating that this project, which it claimed would control flood and drought conditions, would be completed by 2043. The apex court reacted on October 31, 2002, directing the Union government to explore ways to achieve the target by 2012 and to constitute a task force in this regard.

In its affidavit, the ministry has listed four major constraints facing the project -- the major one relating to finances. Secondly, states are apprehensive of the project's impact on the already implemented inter-state river dispute tribunal rulings on sharing of water. Thirdly, since a number of the canals would have to pass through national parks and sanctuaries, clearance would need to be sought from the Union ministry of environment and forests (mef). Another important issue relates to relief and rehabilitation measures for huge populations displaced by the canals.

The river networking concept is said to have been necessitated by the paradoxical and perennial shortage of water faced in some parts of India, even as floods lash other regions. It is based on the theory of transfer of water from surplus to deficit river basins.

The proposal to connect the country's northern and southern rivers dates back to the 1970s and the issue surfaces whenever riparian states clash. But this time the Union ministry of water resources has put forth a revised National Perspective Plan. "It is essentially based on the original plan mooted by K L Rao, irrigation minister in Jawaharlal Nehru's cabinet, in 1972," says Radha Singh, additional secretary in the water resources ministry and director general of the National Water Development Agency (nwda). The difference is that Himalayan and peninsular rivers are now being treated separately. The current project relies largely on natural flow and gravity rather than physically lifting water through a series of pumps.
Perhaps the most talked about model for interlinking the country's rivers is the Ganga-Cauvery link canal, which was advocated by Rao. The 2,640-kilometre (km)-long link essentially envisaged the withdrawal of 60,000 cusecs of flood flows of the Ganga near Patna for about 150 days in a year. The plan recommended the pumping of about 50,000 cusecs of water over a head of 549 metres for transfer to the peninsular region. The remaining 10,000 cusecs would be utilised in the Ganga basin itself.

Rao had estimated that his proposal would cost about Rs 12,500 crore. At current price levels, the link would cost Rs 1,50,000 crore. The proposal was rejected by the Central Water Commission, which felt that it was economically prohibitive. Moreover, the scheme would require large blocks of power to lift water. Worse still, it would neither have flood control benefits, nor take care of irrigation needs as no storage was involved.

This was followed by the garland canal proposal presented by a group headed by Dinshaw J Dastur, a pilot, in 1977. The plan talked of two canal systems. The first would be aligned along the southern slopes of the Himalaya and fed by 90 lakes. The second central and southern garland canal was to have about 200 integrated lakes. The cost of the project was put at Rs 24,095 crore. Two expert committees examined the proposal during this period, and rejected it on the grounds that it was technically unsound and economically unviable.
The government is now mooting a new plan, which is a revised version of the National Perspective Plan evolved in 1980. In this plan, the Himalayan river development involves the construction of storage reservoirs on the principal tributaries of the Ganga and the Brahmaputra in India, Nepal and Bhutan. Along with this, it proposes inter-linking canal systems to transfer surplus flows of the eastern tributaries of the Ganga to the west. The linking of the main Brahmaputra and its tributaries with the Ganga, and the latter with the Mahanadi, is also mooted.

Under this plan, with a cost factor of Rs 5,60,000 crore, the nwda has identified 30 links for a feasibility study -- 14 in the Himalayan component and 16 in the peninsular one (see map: Redirecting the flow).

The nwda seeks to plug two major loopholes detected in the Rao proposals -- inadequate water available in the Ganga and the problem of negotiating the Vindhya mountains, requiring either 90,000 megawatts of power or a complex network of tunnels. The 1980 scheme proposes to provide water for the Ganga from the Brahmaputra. Further, the Vindhya mountains will not be negotiated by lifting water but by circumnavigating the range.


The sc has given interim directions and the Union government has to revert to it with its decision. But answers to vital questions also need to be placed before the public. Not just on the economic aspect, but on the social, geographical, ecological and political fronts as well.

Connecting the country's rivers may well be an engineer's dream but the ecological imbalance to the natural drainage of the river basins, not to speak of the massive human displacement that the proposed project would cause, is yet to be fathomed.

Ramaswamy Iyer, former secretary in the water resources ministry, questions the theory that planning must be on the basis of a basin as a natural hydrological unit and that one must cut across basins to link them. This implies redrawing India's geography, he notes.

Each inter-basin transfer must necessarily involve the carrying of water across the natural barriers between the basins. Exceptionally heavy capital investments and continuing energy costs are likely to be involved. In addition, big dams, reservoirs and conveyance systems will need to be built. "Not too many projects could survive such a scrutiny," asserts Iyer.

Fears are also being raised about the entire hydrological cycle by preventing rivers from draining into the oceans. Far from increasing agricultural productivity, the large network of dams and canals will alter the natural drainage, leading to flooding and water-logging. Whether enough research has been done on where and how much surplus is available for transfer is the moot question.

Reiterating that detailed surveys and field-level investigations on all these aspects are not available for independent critical view, emeritus professor of Chennai-based Madras Institute of Development Studies A Vaidyanathan says the idea may have some merit if seasonal patterns of rainfall and stream flow in different parts of the country differed significantly. In India, practically all rivers have their peak flows in roughly the same period -- July to October. Colossal amounts of water will then have to be stored. Geographical constraints would, in any case, make it impossible to design a distribution network that will carry the required amount of water to all segments of the recipient basins, points out Vaidyanathan.

Above all, the reliability and adequacy of water transfer from distant sources is being questioned. Clearance would also be required from the mef on each of the river link projects, some of which pass through national parks and sanctuaries. As of now none have been sought, says the mef.

The project will also have international implications. Under the 1996 India-Bangladesh treaty on the sharing of Ganga waters, India had undertaken to protect the flows arriving at the Farakka barrage. How will a diversion of waters from the Ganga to the southern rivers be consistent with this?

Lastly, the idea of linking the country's rivers, as advocated by nwda, was rejected by a high-level National Commission (on Integrated Water Resources Development Plan) in 1997. "Should we not at least look at the panel's report and see what it had to say before re-floating the idea?" asks Iyer. Clearly, the message that experts are trying to get across to policy-makers is: think twice, maybe even thrice, before taking the plunge.