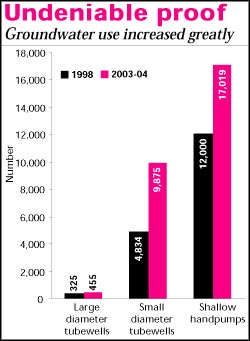 Any discussion on the water problems of Kolkata is a paradox indeed, as the city is situated in the lower reaches of one of the world's largest delta regions. But like all other Indian metropolitan centres, Kolkata too is facing water woes, with both its freshwater and groundwater sources dying at a fast pace. River Hoogly -- the main source of the city's freshwater supply -- is contaminated by industrial and domestic sewage from about 262 outlets. According to the 2003 annual report of the West Bengal Pollution Control Board, the biological oxygen demand (bod) -- an indicator of pollution load -- of the river water at the Palta station rose from 0.91 milligrammes per litre (mg/l) in 1991 to 2.25 mg/l in 2002. This is alarming because Palta station is one of the two places providing drinking water to the city. The coliform count -- an indicator of bacterial pollution -- of the river water is also startling. The maximum probable number (mpn) of total coliform count per 100 millilitres (ml) of water ranges from 20,000 to 1,100,000 at Palta and Garden Reach stations (the other place catering to the city's drinking water supply). The standard set by New Delhi-based Central Pollution Control Board (cpcb) is 5,000 mpn per 100 ml for drinking water source.

Due to the high levels of pollution in the surface waterbodies, groundwater is being exploited at an unsustainable level. As per the Kolkata Municipal Corporation (kmc), the city's present drinking water demand is around 1,262 million litres per day (mld). Supply is about 1,209.6 mld, out of which 1,096.2 mld is surface water, and 113.4 mld is groundwater. Officially, there is a gap of 37.8 mld between demand and supply.

The situation, in fact, is much more distressing -- Kolkata's population is 14 million; in India, per person water requirement on an average is 135 litres. Hence, the city's demand for drinking water should be 1,890 mld. Considering that kmc is only supplying 1,209 mld, there is a gap of 586 mld, which is undeniably met by groundwater extraction. Together with the 113.4 mld extracted by kmc, this figure translates into a perilous exploitation of groundwater: 699.4 mld.

The situation becomes more alarming considering that very little recharge takes place in the aquifers. They are confined -- sandwiched between clay layers. The top layer (30-50 metres thick) does not allow rainwater to seep in.

A study by R Bandyopadhyaya, principal secretary, water investigation and development, West Bengal government, shows that the rampant groundwater use has led to the formation of a conical depression in the aquifers. The depression means that the water rushes from all parts of the city towards the south-central areas; as a result, the groundwater levels in the former are going down -- from 0-1.5 metres below ground level in 1956 to 6-8.5 metres below ground level in 1993 (see diagram: The conical...). 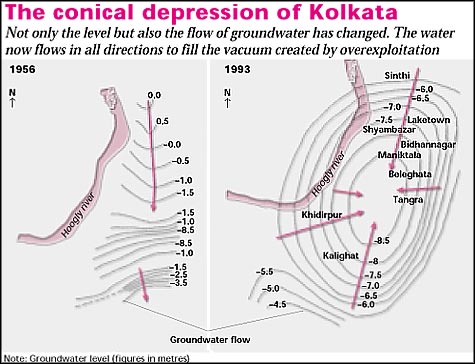 The depression has also changed the direction of the flow of underground water. In 1956, the water used to flow from the northern parts of the city towards the south, where more water was being extracted. But at present, the water is flowing from all directions towards the southern part of the city. "If the depression enlarges, then saline water will make its way into the aquifers," says Bandyopadhyaya. This will further degrade the groundwater quality by increasing chloride levels.

According to Bandyopadhyaya, to avert a crisis, the state government will soon pass a regulation to prohibit the indiscriminate use of groundwater. Experts feel the city should also think about artificially recharging the aquifers and reviving surface waterbodies.