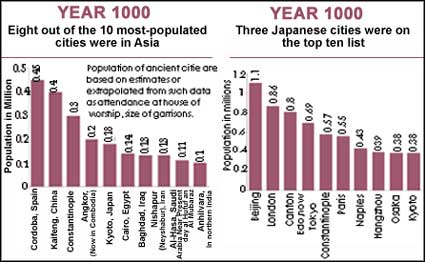 Cities are known to generate a lot of waste and contribute in a major way to water and air pollution. They have become a major source of concern in the 20th century. City authorities will have to be particularly vigilant in the next millennium. According to Worldwatch Institute estimates, Mumbai will be the third-most populated metropolis by the year 2000. Its population is expected to reach 18 million, just 0.1 million behind Mexico City, the second-most populated city after Tokyo. The first cities emerged from farming villages in Mesopotamia about 6,000 years ago. However, the biggest urban explosion took place in the 19th century when Beijing became the first city with a population of one million. By the 20th century the industrialised cities of Europe and North America surged past Beijing. At the beginning of the 20th century, North America and Europe were home to most of the top 10 cities in the world. Today there are around 200 cities with one million residents each. But five of the top ten cities in 2000 will once again be in Asia.