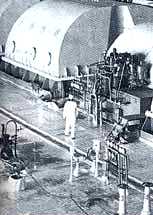 CLAIMING that the Chernobyl nuclear power plant had become one of the safest in the world because of the safety measures that have been introduced since the 1986 explosion, Ukraine energy minister Vilen Semenyuk has urged the parliament to reverse its decision to shut down the reactor, which has been plagued with problems since the disaster. As recently as August 1993, doctors claimed that the birth of a two-headed baby in Moldova was the result of the disaster at Chernobyl.

Meanwhile, in USA, the 14-year-long operation to clean up the contamination caused by the 1979 accident at the Three Mile Island nuclear plant has come to an end, with the evaporation of the last bit of polluted water.