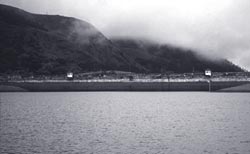 a seemingly well-meaning legislation, recently adopted unanimously by the Kerala assembly to protect its river waters, is set to cause further turbulence in the state's relations with neighbouring Tamil Nadu (tn).

The Kerala Irrigation and Water Conservation Act, 2003, stipulates a review of all inter-state water agreements, besides constituting a dam safety authority which will have powers to recommend even decommissioning of a dam. The new legislation will enable the assembly to have the final say in the inking of all future inter-state water pacts involving Kerala. Till now, the deals were cleared by the state cabinet.

It may be noted that Kerala and Tamil Nadu are already at daggers drawn over many water treaties, particularly relating to the Parambikulamaliyar project and Mullaperiyar dam. The passage of the new act will have a direct bearing on the fate of the 109-year-old Mullaperiyar dam, which is located in the Idukki district of Kerala but supplies water to tn. According to the Kerala government, tn has been receiving water from the dam on the basis of a number of pre-independence river diversion agreements. Parties across the political spectrum feel that the agreements are heavily loaded against Kerala. The legislation is also expected to decide the fate of a controversial proposal to link Pamba and Achankovil rivers of Kerala with the Vaippar basin in tn. The proposed dam safety authority, to be chaired by a retired high court judge, would be empowered to scrutinise the safety of any dam in the state.

E J James, director of Kerala's state-owned Centre for Water Resource Development and Management, avers that there is nothing controversial in passing an act to manage water resources, as water is a state subject. Meanwhile, tn's water experts and managers are concerned over the adverse impact of the politicisation of the issue.