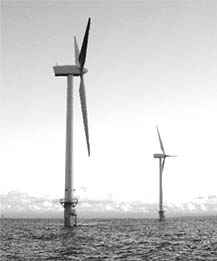 SEVERAL offshore wind energy projects to be soon implemented in the UK have been criticised by the country's ministry of defence (MOD) on the grounds that the turbines would affect the functioning of radar systems and get in the way of low flying jets. The MOD has already scrapped one major wind project on similar grounds. "There is no blanket policy on wind turbines," said a MOD spokesperson. Experts say that such decisions are threatening the government's target of generating 10 per cent of electricity from renewable sources by 2010, part of its bid to curb the emissions of greenhouse gases for meeting its Kyoto Protocol target.

"If the MOD's attitude does not change then we will have a major problem," said Alan Moore, managing director of National Wind Power, a subsidiary of utility Innogy. According to him, MOD could install software to stop wind turbines from interfering with radar systems. He cited the example of Germany, which has already installed thousands of wind turbines without compromising with defence systems. "Virtually all the sites fall within the range of radars. I am sure that MOD will try its level best to get all the projects rejected," said Moore.