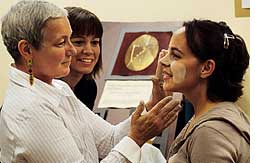 modern medicine has found clay can be of good use now. Though it has been used as cosmetic by beauticians for long, therapeutic values of clay has not been recognized by modern science. us researchers have found the green clay in the mountainous regions of central France possesses antibiotic properties.

The clay fights harmful bacteria such as Escherichia coli, Salmonella typhimurium and even checks the strains of Staphylococcus aureu, which has been increasingly found to be antibiotic-resistant. Lynda Williams, lead researcher of the Arizona State University team, says the anti-bacterial clay is highly alkaline, with a pH value of 9.4-10, and this property could have made it antibiotic. "We are trying to decipher the chemical properties of the clay and the exact mechanism it uses to kill bacteria," says microbiologist Shelley Haydel of the Center for Infectious Diseases and Vaccinology of the University of Arizona in the us.

The research team identified the clay after a traditional medicine practitioner from France reported its therapeutic qualities. He was successfully treating Buruli cancer, a disfiguring illness caused by the bacterium Mycobacterium ulcerans. The cancer is common in Central and Western Africa.

The team analysed the properties of the clay as part of a wider research programme of the National Institute of Health's National Center for Complementary and Alternative Medicine at the State University of New York at Buffalo . G eologists at the centre have been studying the characteristics of a wide range of antimicrobial clay. They have so far identified two anti-microbial clays from a group of 25 clay varieties.

How does the clay work against bacteria? "We are studying the interactions," says Rossman Giese a geologist at the university. Giese says antimicrobial clays act physically, unlike antibiotics which kill the bacteria through a chemical process. Anti-microbial clay, however, punctures the bacterial cell, making it leak to death. Since it is a physical process, there is little chance of the bacteria developing resistance against the clay because it cannot form neutralising chemicals against the compounds in the clay, he explains.

The therapeutic factors in clay have made researchers come up with new concepts. Researchers at Buffallo, for instance, have successfully modified a clay that destroys several harmful bacteria. The clay, claim the researchers, kills bacteria in sewage and has been being used to treat filters in some hospitals in the us. The findings were presented at the annual meeting of the Geological Society of America in Denver on October 29, 2007.

Still there has been little scientific research into the medicinal properties of clay though there has been efforts to prove the efficacy of the traditional practices. "Our experiments have found clay from various parts of India to be curative. However, no clay possesses any specific properties," says Chidananda Murthy, director, Central Council for Research in Yoga and Naturopathy in Delhi. The medicinal use of clay is now increasing across the globe, especially in many Western countries. Still, there is not much research into it. One of the very few studies on curative clays is a study published in 1997 in the journal Clinica Chimica Acta (International Journal of Clinical Chemistry).

The study found that osteoarthrosic patients significantly benefited from a 12-day mud-pack application. Calcium bentonite clay which is found in sub-surface mines in California has, for example, been found to be effective against external injuries. It is also used for body detoxification.