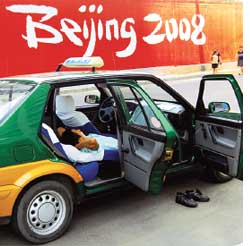 in china, taxi drivers are perhaps the most exposed to air pollution. Cleaning the air of a city might make their hearts healthy, a study reported. Eleven healthy non-smoking taxi drivers of Beijing who worked 12-hours a day were monitored before, during and after the 2008 Olympics.

China had taken a series of stringent measures to lower air pollution during the Olympics. For example, the government had banned the use of more than half the vehicles in the city every day. Researchers from China and the US assessed the impact of fine particulate matter (PM 2.5) on the heart rate variability (hrv) of taxi drivers. hrv is the measure of time between one heartbeat and the next. It is a marker for heart disease risk. When PM 2.5 levels were lower during the Olympics, the hrv was relatively higher. But, before and after the Olympics, higher PM 2.5 exposure was linked to relatively low hrv, the researchers found in the study published in Environmental Health Perspectives on September 15.

People who live in heavy traffic areas or traffic intersections should use ventilation devices frequently and close the windows or doors when the ambient PM air pollution becomes severe, said Shaowei Wu, one of the investigators of the study from Peking University School of Public Health in China.