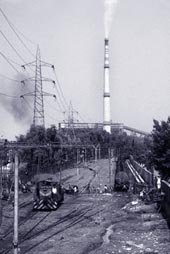 In 1999-2000, the Union ministry of environment and forests (mef) had stipulated that Delhi's Indraprastha thermal power plant (tpp) -- which runs on coal -- would be shut down within six months of the natural gas-based Pragati power plant being commissioned. While the latter will be fully operational by February end, the Delhi government wants the former to continue functioning. The fact is that even as tpps based on coal are known to cause pollution, they remain the mainstay of India's power sector. This incongruity underscores the need for clean coal technologies (ccts).

It is ironical that though premier research bodies of the country have been studying these technologies for nearly four decades, they are yet to be adopted on a large scale. In this regard, the attempts made so far by the government can at best be described as half-hearted. Because it has failed to chalk out a clear-cut plan on ccts despite making all the right noises about them.

"A long-term strategy for the development of ccts in the country is needed, which would require various ministries and institutes to work in tandem. The initial investment for these technologies might be high but they will be beneficial in the long run," opines Malti Goel, an adviser to the Department of Science and Technology (dst), New Delhi. Not only do ccts generate power more efficiently, they are also environmentally benign compared to the present-day pulverised coal combustion (pcc) technology.

According to the Union ministry of power (mop), the sector is plagued by an average energy shortage of 7.8 per cent and peak demand shortage of 13 per cent. To bridge this gap, an additional 1,00,000 megawatts (mw) of power -- costing nearly Rs 8,000 crore -- is required by 2012. "The large coal reserves in the country provide a ready and economical resource and ensure energy security...," observes the mop in its 'Blueprint for Power Sector Development (2001)'.

However, the coal found in India is low-grade and has high ash content (24-45 per cent). Consequently, its use leads to an increase in the emission of pollutants such as suspended particulate matter (spm) and oxides of nitrogen (nox). " tpps use pcc technology, which is polluting and has low efficiency," points out S K Paliwal, a scientist with the Central Pollution Control Board (cpcb). Both these problems can be overcome through ccts, he adds.

"The Union government's power generation target for the next 10 years is over-optimistic given our past track record. In this scenario, cct development will be the last thing on the authorities' mind," feels K Basu, former scientist, Bharat Heavy Electricals Limited (bhel), Hyderabad.
In the pcc process, coal is burnt to generate steam. The steam is then used to run a turbine and produce electricity. This technology has low efficiency levels (30-35 per cent). Yet it is favoured worldwide for boilers up to 1,000 mw capacity. In some state-owned tpps, efficiency dips to as low as 25 per cent. "So far as technology goes, pcc plants have reached their saturation point," avers Basu.

"The boiler temperature of 1200-1300 degrees centigrade is ideal for nox formation," says Paliwal. And even though authorities claim that emissions of oxides of sulphur (sox) are not an issue in the Indian context, they can be hazardous in certain circumstances (see box: Soft standards). tpps are also known to cause pollution by producing flyash. "In industrialised countries, tpps generate only 10 per cent flyash. In India, some tpps produce up to 55 per cent flyash. And only a small percentage of this gets utilised," states a bhel official.
"ccts are technologies for the 21st century and need to be used for cleaner power generation," asserts Goel. They can be implemented right from coalmines up to the post-combustion process. Most Indian tpps have an electrostatic precipitator fitted in the chimney, which controls spm emissions up to 100 milligrammes per cubic metre (mg/cum). To bring down emissions to 50 mg/cum, baghouse filters are generally used. "In India, hardly one or two power plants have these. The filters, though expensive, can meet very stringent emission norms," says Paliwal.

The emission of sox can be controlled by using flue gas desulphurisation (fgd) -- a state-of-the art technology for so2 emitters like power plants. It uses lime or limestone to remove so2 from the gases produced while burning fossil fuels. Despite this only a few tpps have installed fgd, as there are no regulations for the control of sox in India. "The Trombay power plant uses this technology partially and 25 per cent of the flue gas is scrubbed with seawater to control sox," Paliwal informs Down To Earth . The Dahanu-based tpp in Maharashtra has already been directed by the Dahanu Taluk Environment Protection Authority to use fgd, since it is located in an ecologically fragile area.

As per an mef notification, any tpp with more than 500 mw capacity should allot space for fgd so that it can be fitted in the future. But this is not mandatory. Predictably, there are hardly any takers because the cost of fgd works out to about 30 per cent of the total plant cost, says Shandilya.

In 1999, the mef notified that "no person shall, within a radius of 50 km from coal or lignite-based tpps, manufacture clay bricks or tiles or blocks for use in construction activities without mixing at least 25 per cent of ash". In addition to this, tpps were required to supply free flyash to manufacturers. Four years down the line, tpps continue to dump their ash into waterbodies or on wasteland. The utilisation of flyash by brick manufacturers is as low as 3-5 per cent, according to bhel.

Experts say that the government is not committed to developing these technologies. This was in evidence a few years back when the dst had recommended that a cct mission be set up in the country. According to an official, the proposal was summarily shot down.

Adoption of ccts also depends on power tariff, which is largely controlled by the government at present. Paliwal puts some posers: "The power generated by ccts will definitely be more expensive than that from pcc plants. Will consumers buy expensive electricity? Who will ensure that once the 'green' power is generated, it is also sold?"

The cpcb's 2002 report, 'Evaluation of Clean Coal Technologies', indicates that sound financial packages are required to encourage investors to opt for emerging technologies. Zero interest loans could be one incentive. A single agency should coordinate site and project approval for tpps based on ccts. Unless a definite policy is framed, detailing how ccts would be used to achieve power generation targets, these technologies will stay stuck at the research and development stage. And the clean power concept will remain static.