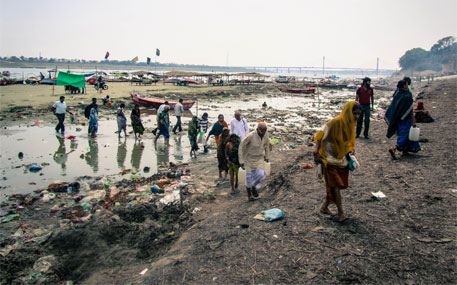 The Indian government on Wednesday approved a budget outlay of Rs 20,000 crore for rejuvenation of the Ganga over the next five years. The approval marks a significant increase over Rs. 4,000 crore incurred by the government on Ganga cleaning projects since 1985.

The announcement signals a major shift from previous efforts as the Centre will now be entirely responsible for the funding of various projects and activities that fall under the programme.

According to the official press release, the new programme shall be designed keeping in mind the lessons learnt from the failures of previous Ganga action plans. The government hopes to enlist the support of locals living on the banks of the river as well as grassroots institutions such as urban local bodies and panchayati raj institutions.

The programme will be implemented by the National Mission for Clean Ganga (NMCG) in conjunction with its state counterparts—the State Programme Management Groups (SPMGs).

The focus of the programme is on the abatement of polluting activities in and around the river through “interception, diversion and treatment of waste water flowing through open drains through bio-remediation/appropriate in-situ treatment/use of innovative technologies/sewage treatment plants (STPs)/effluent treatment plant (ETPs)”, says the release.

The programme aims to rehabilitate and augment existing STPs and introduce stop-gap measures to arrest pollution at exit points on the river.

The government also plans to strengthen enforcement by establishing a Territorial Army unit called the Ganga Eco-Task Force. It is contemplating legislation to check pollution and protect the river.