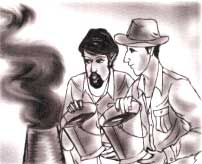 THE European Commission (EC) has come up with proposals to cut the emissions of dangerous gases from waste plants. The plan would cost about us $660 million per year. Emissions from waste incineration plants affect human reproduction and impair mental ability. This plan, EC officials say, will curb pollution.

But these proposals need the approval of the Union's 15 nations. If adopted, they would cut emissions of dioxins and furans - two of the pollutants - by more than 99 per cent 5 from 1994 levels. Environmentalists say that these proposals are necessary because incineration accounts for 20 per cent of municipal waste and is projected to grow from 31 million tonne a year in 1990 to 56.5 million tonne by the year 2004.

Under the proposed plan, the cost will be for installation or upgrading of pollution control equipment. The plan will also encourage the increased use of chemicals. The cost will be initially met by plant operators but overtime municipalities and local taxpayers will foot the bill.

Other proposals by the EC include limits for mercury and cadmium as well as a range of acid gases. Exposure to cadmium has been associated to lung cancer and kidney damage.