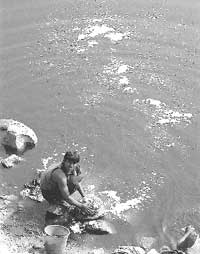 the Central Pollution Control Board (cpcb) has submitted a Rs 480 crore Yamuna action plan to the Delhi High Court to clean the river. "The plan is being funded by the Overseas Environmental Cooperation Fund, Japan. So far, an amount of Rs 121.52 crore has been spent on the programme and it is targeted for completion by March 31, 1999," the cpcb affidavit filed by advocate R C Verma stated.

The Board said that sewage discharge into the river is one of the major reasons for pollution for which 14 sewage treatment plants were in various stages of construction. The Delhi Water Supply and Sewage Disposal Undertaking officials said that nearly 70 per cent of the work was completed and was expected to be completed by mid 1998. The action plan for restoring water quality was prepared in consultation with national river conservation directorate, Delhi Water and Supply and Sewage Disposal Undertaking, Haryana Pollution Control Board, Uttar Pradesh Pollution Control Board and the Delhi Pollution Control Board.