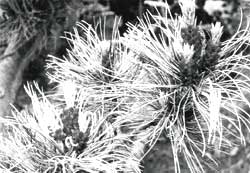 one area of research that has seen tremendous progress over the last few years is phytoremediation, or the use of certain plants to clean up toxic chemicals and elements. To give us a cleaner world, scientists are unleashing the amazing gene genie on these plants, genetically modifying them to fight the numerous polluting compounds that have accumulated over the years. Different plants clean up different chemicals. For some of them, cleaning comes naturally. Others, of course, have to be modified by geneticists before they acquire their cleaning powers.

The latest news from the world of phytoremediation tells us that Japan's Hokkaido Forest Products Institute has developed a process that helps conifer leaves clean up certain heavy metals from water. Heavy metals may have their own uses, but when it come to a better world, they are definitely not invited. Extremely toxic, these must be treated with care, or else they could damage our environment substantially. And this is certainly true for chromium, a precious metal used for plating.

Chromium compounds come in two types: those with chromium in the plus-3 state, or with three electrons, and those with chromium in its plus-6 state. Of these two, chromium-6 is by far the most toxic. It mixes readily with water, which means that it can easily escape into the ground water reserves from polluted soil and cause widespread havoc.

Large quantities of chromium-6 are generated during metal refining and plating processes, and Japan's legislation severely limits emissions from factories. However, that still leaves the polluted land and contaminated water.

The basic technologies are already in place to treat highly-polluted waste water and soil, lowering the heavy metal concentration to a more manageable level. Chromium-6, for instance, can be treated with certain chemicals to convert it to its less-harmful incarnation -- chromium-3. This can then be precipitated and disposed of.

The focus, now, has shifted to the development of technologies that deal with low level contamination and completely remove chromium-6 and other heavy metals. And researches at the Hokkaido-based Forest Products Institute, using leaves of conifer plants, have developed a substance that can remove chromium-6 with 100 per cent efficiency from waste water.

That leaves of certain conifers can attract heavy metals was already known, but researchers took this a step further to develop a functional removing agent.Leaves are powdered to make this agent, and the removal process is carried out under highly acidic conditions. A mixture of leaves from trees such as Japanese larch, cypress and black pine seems to produce the best results. When a 0.2 per cent mix of the removing agent is added to waste water containing as much as 200 times the environmental base level of chromium-6, all of the heavy metal can be removed from the water in just one day.

Though the institute is not very clear about the mechanisms of this process, the researchers believe that it involves physical absorption of chromium-6 inside the leaf tissue, followed by a chemical reaction that fixes the chromium-6 ions so they cannot escape backinto the water.

The only drawback of this process is that some industrial waste liquids contain heavy metals in high concentrations of thousands of parts per million, so enormous volumes of the removing agent would be required for treatment. And that slams the technology up against the brick wall of economics. But researchers understand that their technique is not a cure-all and should be used in combination with the existing technologies.