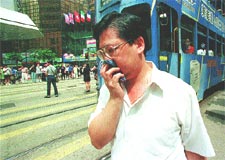 Air pollution levels are soaring in Hong Kong. Smog drifting from the neighbouring Chinese province of Guangdong is said to be one of the major reasons for the alarming trend. To combat the menace, Hong Kong and Macau have been included in a Chinese pilot project under which strict pollution limits will be imposed on power plants and factories. Companies which meet these standards will earn credits that they can either save or sell to defaulting firms.

Polluted mainland cities such as Shanghai, Tianjin, Liuzhou and four provinces are already covered by the scheme. The state environmental protection administration has also agreed to include Guangdong in the project, environment secretary Sarah Liao reportedly said.

It is not known when the project will commence, but it would take 10 years for a regional emissions trading market to emerge. Meanwhile, targets are in place to reduce smog levels in the Pearl river delta area -- which includes Hong Kong and Macau -- by 2010. Estimates indicate that pollutants would increase in the region in the next few years.