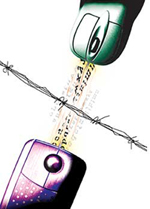 Alongside the battles raging in the Gaza strip, another war is being fought--a virtual one, over the Internet. In this war Israeli and Palestinian propaganda disseminators have deployed Internet tools such as Twitter, Facebook, YouTube and blogs. Volunteers work alongside official public-relations entities, presenting their own positions and reporting from the field.

One of the main tools used in the unofficial public relations campaign is Twitter, a service that allows surfers to write short updates--usually limited to 140 characters, which others can receive in a variety of ways, including by cellular phone. Israel's Consul for Media and Public Affairs in New York, David Saranga, has gone so far as to conduct a press conference via Twitter. msnbc newscaster Rachel Maddow criticized this as the Israeli government's attempt to explain, in 140 characters, a conflict on which books have been written and reporters struggle to describe in 2,000 words.

The Palestinian side is also exploiting Twitter. Among other things, Palestinians operate an account on Twitter named GazaNews, which submits reports from the field and directs users to their propaganda and anti-Israel video clips.

A few thousand Israeli websites (including that of Israel's Labour Party) have been hacked from Morocco, Algeria, Lebanon and other countries since the operation began in Gaza.

Israelis have not remained idle. One of their online campaigns is win-israel-help, which enables surfers to download a file dedicated to creating heavy traffic on Hamas websites--forcing them to shut down.