Sea-level rise, food scarcity are major worries; even after strong adaptation efforts there will be further loss and damage in the continent, says UN report 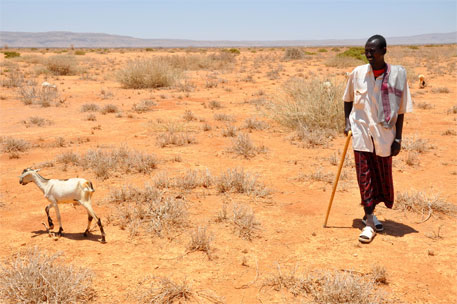 “Based on existing emissions trends and mitigation pledges, the science shows we are on course to a 4°C world by 2100,” says a recent report. Titled, Loss and Damage in Africa, the report also says that at such warming levels, impacts for Africa are expected to be substantially greater.

Even at around 1.5°C temperature rise, about 25 per cent of Africa’s land area is projected to experience unusual heat extremes in summer, and this rises quickly, exceeding 45 per cent in a 2°C world and 85 per cent in a 4°C world. Significant increases in, and exacerbation of, water stress have also been projected by the study.

By 2100 sea-level rise along Africa’s coastlines is projected to be approximately 10 per cent higher than the global mean. The largest share of population would be at risk in Guinea-Bissau, Mozambique, and The Gambia, with up to 10 per cent of their national population at risk of being flooded annually. Larger tropical cyclone-induced storm surges are another impact of global climate change, which, in conjunction with sea-level rise, would place more people at risk of coastal flooding.

At warming of around 3°C, virtually all of the present maize, millet, and sorghum cropping areas across Africa could become unviable for the current crop varieties. Rates of undernourishment in the Sub-Saharan African population are projected to increase by 25-90 per cent compared to the present at a warming of around 1.5°C by 2050.

In order to assess feasible adaptation options, the analysis of costs and benefits is crucial. Below is a graph that suggests what the adaption cost of fighting all the loss and damage in Africa could be by 2010 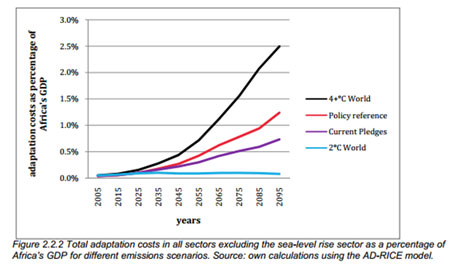 Challenges and call for action

“Addressing loss and damage requires building preventative resilience, managing risk, assisting in rehabilitation and providing redress in the event of permanent loss,” says the study that has mentioned three areas of coordinated activity.

1) Minimising loss and damage by building preparatory resilience, which can include hazard mapping and measures to make assets more resistant to damage

3) Provision of redress in the event of permanent loss where the status quo cannot be restored, for example, where permanent relocation or changes to livelihood activities are required

The challenges suggested in the report include lack of funding, lack of scientific and technological capacity and limitations of insurance schemes. Criticising the “existing international arrangements, the report says that “the fragmented approach of the international arrangements outside of the UNFCCC falls far short of providing the African continent with the coordination, consistency, scale, funding, capacity and technology that is needed to bridge the existing gaps.”

The report that has tried to map various aspects of loss and damages, has, however, also warned that under all warming scenarios and despite strong adaptation efforts in the region, considerable adverse effects of climate change will be felt in Africa, resulting in further loss and damage.

Report: Loss and damage in Africa