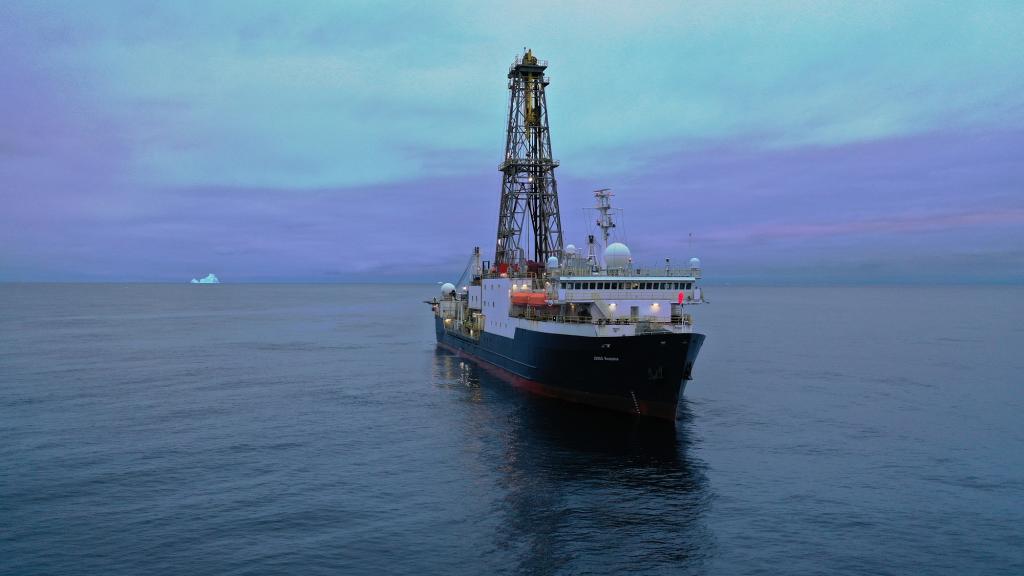 Competition is stiff for one of the 30 scientist berths on the JOIDES Resolution research vessel. I’m one of the lucky ones, granted the opportunity to work 12-hour days, seven days a week for 60 days as part of Expedition 382 'Iceberg Alley' in the Scotia Sea, just north of the Antarctic Peninsula.

I’m a paleooceanographer. My research focuses on how Earth’s oceans and climate operated in the past; I’m especially interested in how much and how fast the Antarctic ice sheets melted between 2.5-4 million years ago, the last time atmospheric carbon dioxide levels were about 400 parts per million, as they are today. This work depends on collecting sediment samples from the ocean floor that were deposited during that time. These sediment layers are like a library of the Antarctic’s past environment.

The JOIDES Resolution is the only ship in the world with the drilling tools to collect both soft sediment and hard rock from the ocean — material that we recover in long cylinders called cores. No wonder researchers from all over the world, at all career stages, are excited to have travelled from India, Japan, Korea, the Netherlands, Germany, Spain, Switzerland, Brazil, China, Germany, Australia, the United Kingdom and, of course, the United States to join the expedition.

Two months is actually a short amount of time in which to address scientific research questions, but there have been years of careful planning and detailed preparation in advance of this expedition. We scientists onboard make best use of our limited time by drilling at what we’ve already agreed should be the most informative locations.

When the ship arrives at the designated GPS location, the captain, the lab officer and the drilling engineer all check the position coordinates several times. With the ship’s thrusters keeping it precisely in place, workers lower coring equipment, including drill pipe, through an opening in the center of the ship. When the drill pipe reaches the coring depth — in our case ranging from 2,600 feet (800 meters) to 12,500 ft (3,800 m) — we lower a coring tool on a wireline down through the pipe.

Most of our cores are taken with an advanced hydraulic piston corer. In a process similar to using an elaborate cookie cutter, it punches through the ocean floor and collects a thin cylinder of the rock and sediment: our core sample. The wireline brings the 31-ft-long (9.5 m) core back to the ship. In the ship’s lab, we split the core lengthwise into an archive half — to be photographed and described — and a working half. This is the one we sample onboard for density, chemistry and magnetic properties.

Today the Greenland and Antarctic ice sheets contain 99 per cent of Earth’s fresh water. If all the Antarctic ice were to melt, average sea level would rise 200 feet (60 m). This won’t happen in your lifetime. But knowing how fast an event like this can occur — based on how fast ice has melted in the past — is critical to preparing for the sea level rise already accompanying Earth’s currently warming temperatures. Helping to understand that past change is one of the goals of our work on this expedition.

Establishing when it was that melting glaciers originally deposited the sediments we’re collecting is crucial and difficult. Only by dating this process can we figure out how fast the ice sheets disintegrated. There are two complementary approaches that researchers have traditionally used.

Paleontologists look at tiny microfossils from organisms such as diatoms, radiolaria and dinocysts that are found in the sediment cores. Then they can match up the species they spot in the samples with the timeframes they were known to exist. For instance, a paleontologist might know from previous research that a particular species of diatom lived between 1.8 and 2.6 million years ago.

A second method of dating depends on paleomagnetists measuring the strength and direction of the sediments’ magnetism. Over Earth’s history, the magnetic field has reversed, with magnetic north flipping to point south, at irregular intervals. Scientists know when the reversals occurred. In the period from 1.8 to 2.6 million years ago, for example, the magnetic field flipped four times.

The paleomagnetists look for reversals in the alignment of magnetic minerals in the sediment we collect, and if they find them, they can better identify when, within that 1.8 to 2.6-million-year time interval, the sediment was deposited. If reversals are not present, it might mean the sediment accumulated so fast that only one magnetic interval is represented, or that part of the sediment record is missing. To determine which possibility is more likely, they talk to the people describing the visual properties of the core to see if there are abrupt changes that might indicate a disruption in the sedimentary record.

This sort of observation and consultation proceeds continuously as the cores come up and scientists work their shifts. For me, the joy of this at-sea experience is collaborating with other scientists on the same problem at the same time. If each of us was working in isolation in our own lab, collecting this much data would take years.

Working alongside the scientists are 30 technicians who know how to operate the lab equipment, curate the hundreds of cores and keep all the computers running, and two outreach educators. All of this work is made possible by 65 people including a drilling crew, who operate the heavy equipment that collects the cores; the marine crew, who drive and maintain the ship; and the stewards who prepare the food, do the laundry and clean the ship.

To feed 120 people for two months, 17 pallets of food are onloaded at each port call; each grocery order includes 12,000 eggs, a ton (976 kilograms) of potatoes and 800 pounds (360 kg) of butter. There’s a full-time baker, and the cooks prepare four full meals a day and provide snacks for four coffee breaks. A small gym is available to help to offset the abundant food. On some expeditions, people run on the helipad on the ship’s stern.

It’s too cold and the seas are too rough for that on this expedition. Instead, we have the thrilling opportunity to see icebergs, whales and penguins. Few places in the ocean offer such a view — but plenty of danger comes with it.

With drill pipe extending 10,500 ft (3,200 m) — about two miles — to the sea floor and as much as a further 2,000 feet (600 m) into the hole, we would not be able to move quickly out of the way of an approaching iceberg. It can take two hours to remove the pipe from the hole. Since the ship is attached to the drill pipe, if an iceberg were fast approaching, there might not be enough time to retrieve the drill pipe — we’d have to break the connection with explosives. Hence, there’s a strict protocol for dealing with icebergs and an experienced ice observer onboard who helps monitor the speed and direction of the nearby icebergs.

Shipboard life has changed since my first participation in the scientific ocean drilling program almost 40 years ago. Back then, onboard the program’s first drill ship, the Glomar Challenger, the internet and email were not an option. To contact a person on land, an amateur radio operator on the ship would contact a shore-based shortwave radio operator who would then place a collect call to the person you wanted to speak with. If the call was accepted, you could converse, ending each part of your message with “Over” to let the recipient know it was their turn to speak. Since the entire ship could hear the conversation, as well as anyone in the world listening on the radio, it wasn’t conducive to personal communication.

There are many other changes onboard. Core sections are now scanned by multiple machines that improve the interpretation of the data, and new tools allow better core recovery.

Soon the expedition will be over, but the research will have only begun. After we’ve returned to our normal lives on land, we’ll continue to collaborate. I’ll be analyzing the size and composition of different parts of the sediment that came from land. Which parts were brought by icebergs, where did they originate, and when were they most active? How much of the sediment was transported by deep ocean currents or even by wind? Colleagues will be addressing the same questions but in the younger sediment, or determining the environmental conditions in which the microfossil communities thrived.

In two years, we’ll reconvene and spend several days presenting the results of our individual research. Each is a part of the larger puzzle about past climates and the rates and causes of climate change before the process was accelerated by human activity.