Finally, a breakthrough on agriculture on the cards at Bonn

Draft document on agriculture stresses on assessment of risks, a differentiation of vulnerability and actions required based on farming systems and agro-ecological zones 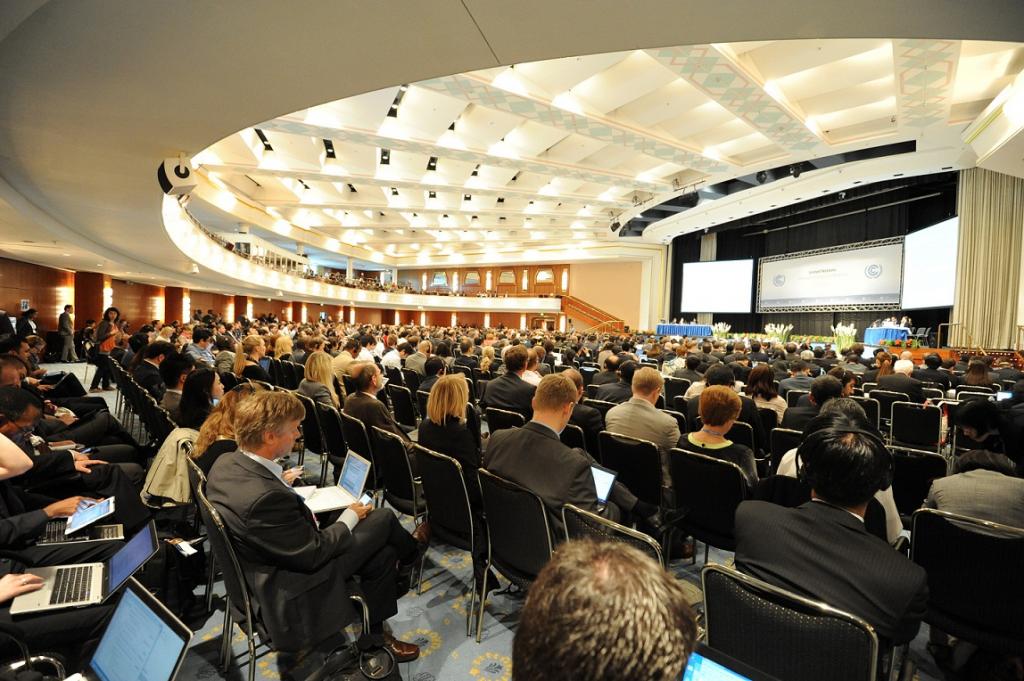 So far, negotiations on agriculture have been sluggish despite the fact that agriculture and land-use changes account for one-fourth of GHG emissions Credit: UNClimatechange Flickr

The theme of the day today at COP23 in Bonn was agriculture. The venue saw a day full of side events and panel discussions dedicated to informal deliberations to minimise agriculture’s contributions towards climate change and the impacts faced due to it.

Events throughout the day focused on the need to step up adaptation and mitigation finance to help the agricultural sector cope better and build climate-resilient agriculture to offset damages that have been increasing in recent years, especially in the global south and in countries vulnerable to climate change impacts.

“Countries now have the opportunity to transform their agricultural sectors to achieve food security for all through sustainable agriculture and strategies that boost resource-use efficiency, conserve and restore biodiversity and natural resources, and combat the impacts of climate change,” said René Castro, Assistant-Director General of the UN Food and Agriculture Organization (FAO).

But by no means has this opportunity only just presented itself. The need for climate finance and sustainable and climate-resilient agriculture has been spoken about at every session of COP in the recent past. While ideas abound, movement in negotiations beyond this has been sluggish despite the fact that agriculture and land-use changes account for nearly one-fourth of all GHG emissions, according to the 2015 IPCC assessment report.

Not only are the contributions to emissions substantial, the impacts of climate change on agriculture has also been heavy across the developing world, especially in Africa and South-Southeast Asia ,where extreme weather, unpredictable climatic patterns and successive droughts have taken their toll on agricultural production and food security.

After many years of neglect and languishing on the fringes of climate negotiations, activists and negotiators, predominantly from developing countries, succeeded in getting agriculture-related issues included in the agenda for discussions under the Subsidiary Body for Scientific and Technological Advice (SBSTA), which would be used to create the modalities required to deal with agriculture.

One needs to look no further than India itself to glean the costs that agriculture has to bear because of climate change. With farm incomes dwindling, farmer protests have erupted across the country over the past few years. A part of the blame for this has been laid on climate change. The Indian government, for its part, has started a National Mission for Sustainable Agriculture and National Innovations for Climate Resilient Agriculture over the course of a decade to support smallholder farmers who form the majority of food producers in the country. But the projects under these missions are yet to move beyond the pilot stage for implementation.

"The focus for India is clear. We need to shore up adaptation for any negotiation to be fair to our small and marginal farmers and that shall be our priority when it comes to any negotiation on the matter," asserted Ravi Shankar Prasad, Union Minister of India and the country's negotiator at CoP23 in Bonn.

Unfortunately, despite the heavy burden of climate change and a clear position taken by the Indian government, the latter has so far been less than enthusiastic in its pursuit of an agreement that reflects the same. No Indian negotiator was present at meetings on agriculture held during CoP22 in Marrakech, when a draft document submitted by the African nations was blocked by developed countries.

No consensus on agriculture due to difference in priorities

One of the major reasons for this impasse is the fairly common difference in priorities between developed and developing countries. While global warming has had a negative impact on farm productivity on most tropical countries, developed nations, particularly in the global north, have incidentally benefitted from rising temperatures. What this has meant is that while developing countries have pushed for an official recognition of the costs being borne by them in agriculture owing to climate change and reparations for the same, developed nations have been more interested in pushing for an agenda that focuses on mitigation and cutting of emissions from agriculture rather than the impacts themselves.

Is a work plan for climate actions in agriculture on cards?

While inclusion of agriculture as a SBSTA agenda item was seen as a success at that time, there has been little progress since. The disconnect between the conference rooms of COPs and the situation on the ground remains. However, this year, there seems to be some progress on the subject. Sources close to the negotiations have hinted at the possibility of bridging the differences and the acceptance of a work plan for climate actions in agriculture.

"India will not be forced into accepting obligations for mitigations because the need of the hour is adaptation for us. This is a clear and strong position," said Prasad. This year, unlike last, India does have a representative present in talks related to agriculture and India has aligned itself to the G77+China to push forth its demands. The result has been a submission of a draft document made by Uruguay on behalf of the G-77 and China, which focuses on adaptation.

Among the recommendations that 135-country group has submitted, stress has been put on assessment of risks to agriculture, a differentiation of vulnerability and actions required based on farming systems and agro-ecological zones, and the development of early warning systems.

While sources close to negotiations hint at some opposition from developed nations, particularly the EU, optimism about the possibility of a decision at the end of this year's discussions is higher than in the past."It is not easy to get so many countries on board. It is quite possible that the slow pace of negotiations is because we need to develop a system that is acceptable to many. In some cases, like this, that can take many years but there is also strength in numbers and I believe that now the required momentum has been attained and there could a decision on how agriculture can be viewed at the end of this year's conference. There is definitely more optimism about this now than in past COPs," says one negotiator.

Final decision on the same should be clear in few days, but developing nations would hope that now it has drummed up enough support to tide over any opposition that may arise from the developed world.