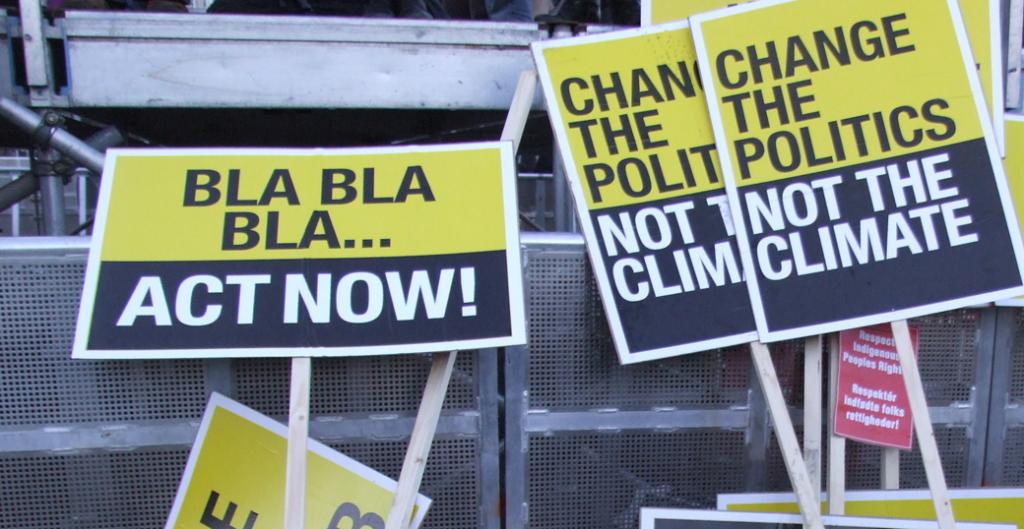 On the third day of the crucial negotiations of the Eighth Conference of Parties (CoP-8) to the United Nations Framework Convention on Climate Change (UNFCCC) around 250 children from various schools in New Delhi and youth from across the country - brought together by CSE – drew sharp attention to the lack of equity and fairness in global environmental negotiations at Vigyan Bhawan.

Dressed in colourful costumes, the children in a bold and dramatic bid entered the precincts of the Vigyan Bhawan to pantomime and caricature the move by the US on Thursday to withdraw from the global negotiations "now and in the future". The US has made it clear that not only will it reject the Kyoto Protocol in the first commitment period (2008-2012), but also that it would reject the Protocol forever more. They were particularly anguished over persistent attempts by the US at the CoP-8 to bait developing countries with short –term financial gains.

Mimicking with balloons and balls in the shape of globes, their tongue-in-cheek protest with placards and slogans caught everybody’s attention, especially those of the negotiators. Notwithstanding the heavy security arrangements at the venue, the children insisted on their concerns being heard. The angry placards read: "Earth has fever. Dr Bush is ill"; "Kyoto Protocol: None in hand, too many in the Bush!; "Emissions of one American equals 7 Latin Americans, 11 Asians and 13 Africans" and "E for Equity".

These children want their concerns on equal rights to the atmosphere addressed - on behalf of the children of the world. They want to caution the 5,000 intergovernmental negotiators from 180 nations, and the Indian government, to be aware of their responsibilities to the future generations. And urge them to move towards a greener and more equitable world. For children will have to live with the rules made here.

They were keen on getting across the message that developing countries were the victims of dirty global politics. Climate change leaves poor people living at the very margins of survival even more vulnerable. So the need to reduce impacts of climate change assumes important proportions.

Their protests spilled over to the neighbouring India Gate lawns. The protest march from Jantar Mantar to Parliament Street Police Station generated a lot of attention and curiosity. To spread the message of global environment governance they organised a festive carnival at the India Habitat Centre and a climate cartoon exhibition.