It is well understood that warmer water contains less gas, and so climate change is expected to reduce oxygen levels worldwide. Observations show this is already taking place in many places. Declines during the past 20 years in the tropical low-oxygen zones, which are the lowest-oxygen waters on the planet, had led to a 2008 study proposing that these zones would also worsen over time.

Tropical regions are usually associated with an abundance of life, but they have some of the most inhospitable places for ocean dwellers. The oxygen-minimum zones off Mexico and Peru have oxygen levels already too low to support most sea animals.

But a new study says predictions that climate warming will lead to decline in dissolved oxygen in ocean waters, may not prove entirely true.

The study by researchers at University of Washington shows that the oxygen-poor zones in the northern Pacific Ocean appear to have been dwindling in size for most of the 20th century.

For the research, lead author Curtis Deutsch, a University of Washington associate professor of oceanography and a climate modeller studied sediment cores collected from the Gulf of Mexico by co-authors William Berelson of University of Southern California and Alexander van Geen of Columbia University.

The team found that for most of the time since 1850 the population of anaerobic bacteria has been decreasing in the Pacific Ocean, indicating that oxygen-deprived zones are dwindling. Anaerobic bacteria are active in zones where oxygen becomes a limiting factor for aerobic bacteria which need oxygen for decomposition and for respiration. 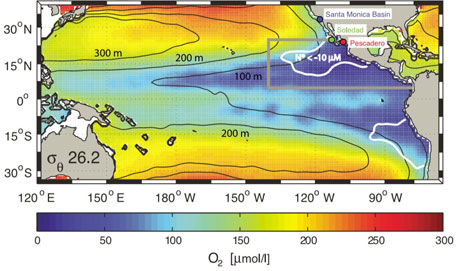 The anaerobes use nitrogen in place of oxygen, but a part of the nitrogen cannot be used by marine life and sinks to the ocean floor. It was the study of this nitrogen that revealed the trend of oxygen-poor zones dwindling in size. The researchers suggest that the ocean waters may be getting oxygenated by tropical Pacific winds.

Breezy affair
The trade winds push the warm surface water towards the west and bring the nutrient laden cold water from the bottom to the top. With the surface having abundant nutrients, it nurtures the marine food chain and its constituent organisms. As the surface biomass flourishes, it eventually fuels the bacterial decomposition process, resulting in oxygen depletion.

These winds were weak for most of the 20th century and resulted in anoverall decrease of biomass production and consecutive decomposition and so shrinking the anoxic zones. The researchers say that warming conditions are predicted to weaken these winds again, which may lead to future contraction of the anoxic zones.

"The tropics should actually get better oxygenated as the climate warms up," said Deutsch. "If we want to understand how biological and chemical aspects of the ocean will change in the future, we really have to pay a lot of attention to what happens with the winds, the winds can lead to conclusions that are exactly the opposite of what you'd expect," he added.