COP 23 at Bonn: Countries show no concern over US exit from Paris deal, see negotiations as business as usual 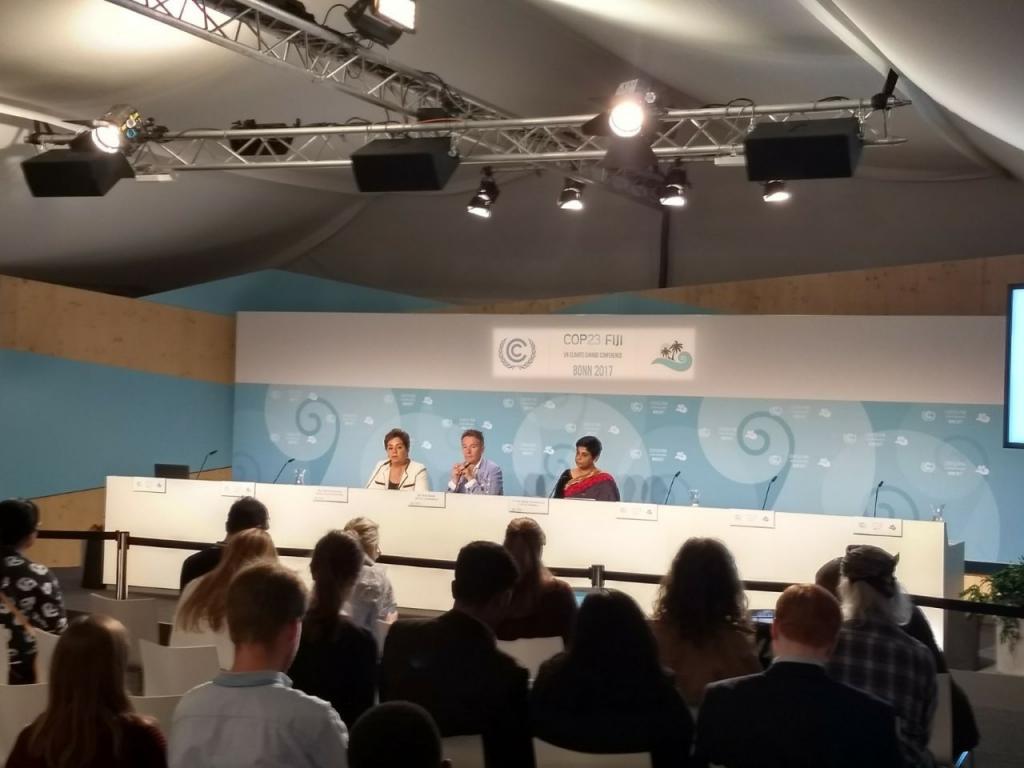 Members of the UNFCCC have not worked on any negotiating strategy and seem ill-equipped or simply unwilling to deal with the US withdrawal. Credit: Shreeshan Venkatesh / DTE

The climate negotiations kicked off in Bonn today (November 6, 2017) to prepare the rule book for implementing the provisions of the Paris Agreement. The Bonn Climate Change Conference is the first UN climate conference after the US—the world’s largest emitter in history—announced withdrawal from the Paris Agreement on June 1, 2017. Ahead of the talks, speculations about the US role in the negotiations were rife. The US itself had given mixed indications about its role at Bonn, from playing a “constructive role” to working towards “securing its economic interests”.

It was expected that countries would come prepared to Bonn with a strategy to deal with the US. Consensus among the developing countries in this regard could have sent a positive message. However, talks with sources from different negotiating groups, including Association of Small and Island States (AOSIS), Least Developed Countries (LDC), Rainforest Coalition and Umbrella Group reveal a worrying aspect: countries do not want to focus on the US withdrawal. In fact, word around the CoP is that US withdrawal will not impact the agreement much.  An AOSIS negotiator was of the opinion that “US withdrawal had helped the climate change issue to garner political attention and increased awareness in general.”

A business-as-usual approach seems to be driving negotiations at this CoP, which has watered down the strategy adopted in the G-20 Summit when major economies came out strongly against the US and reiterated their commitment to climate action. This CoP provided an opportunity for the countries to build on the momentum and adopt a similar approach, which is sadly missing.

Sources in the Secretariat have even shown hope about the US coming back on board as the withdrawal has not come into effect yet and the US would still be part of negotiations. As per the lock-in clause of the Paris Agreement, the withdrawal process will take three years until late 2020.

Members representing the Least Developed Countries (LDC), Rainforest Coalition and African Group have also signalled a business-as-usual approach. An African negotiator, who wished not be named, explained that the “negotiating groups primarily work on specific agenda issues and not on the geo-politics surrounding the negotiations.” This argument does not hold water because substantive discussion on issues cannot happen in isolation as they are influenced by the geopolitical settings. The negotiator failed to throw light on how to separate agenda items from geopolitical settings. The Umbrella Group, comprising rich developed countries members, also has not shown any signs of aligning together to deal with US.

As it stands, the members of the UNFCCC have not worked on any negotiating strategy and seem ill-equipped or simply unwilling to deal with the withdrawal of the US, reeking of an attitude that is mired in denial of the overwhelming possibility. Without any forthcoming regulatory support from one of the largest emitters in the world, this lackadaisical attitude makes it ever more likely that the US would continue to hold the rest of the world hostage to its inaction.

The Bonn CoP is being seen more as a technical CoP with no major breakthroughs expected, although members such as the EU have called for “solid progress” towards preparation of the rule book. Considering that most of the provisions of the Paris Agreement are yet to see any significant progress, one can only wait and see how negotiations unfold in the next two weeks.

Among the major agenda items under discussion are the Facilitative Dialogue (scheduled to be held in 2018) for assessment of climate actions, enhanced transparency framework for monitoring of climate actions and support. Members have also expressed the need to update their commitments following the facilitative dialogue in 2018 and the long-awaited IPCC 1.5 Degree Report due to be released in the same year.

Although India’s focus on pre-2020 actions is welcoming, over the past some time, its involvement in adaptation, loss and damage and agriculture is largely missing.