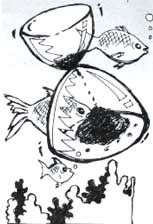 OCEANOGRAPHERS had found evidence that the march of ice ages over the last million years was paced by the cyclical stretching and squeezing of earth's orbit around the sun, which would have altered the way sunlight fell on the planet's surface. But in 1988, researchers scuba diving in Nevada's Devils Hole came up with a climate record - captured in carbonate deposits in the crack - that seemed to contradict this chronology. Tie Devils Hole record traced climate swings of about the same length as the marine record, but they were out of step with the variations of earth's orbit. Most glaringly, these carbonates indicated a profound warming trend, which appeared to signal the end of the penultimate ice age, thousands of years before orbital variations could have be, melt the ice (Science, Vol 276, No 5313).

Almost after a decade of wrangling over whether inaccuracies in the dating of one record or the other might account for the conflict, an arbiter has come forward. Geochronologists Lawrence Edwards and Hai Cheng of the University of Minnesota and Michael Murrell and Steven Goldstein of Los Alamos National Laboratory in New Mexico used a new clock, based on the radioactive decay of uranium-235 to protactinium-231, to check the dates of both the Devil Hole record and records of sea-level change in Barbados coral. The result: the marine record is right and the astronomical theory is on solid ground.

To most oceanographers, the Devil's Hole and the marine records, "are two fundamentally different beasts," says Steven Clemens of Brown University. He and other oceanographers suggest that while the marine records trace the ebb and flow of the ice ages, Devils Hole may chronicle only the climate of a region as small as southwestern North America.

The original confirmation of the astronomical theory came in the late 70s from sea-floor sediment, where the ratio of two oxygen isotopes traces how much water was locked up in the ice sheets when the sediment was deposited. This ice-volume signal showed that water flooded into the ocean from melting ice sheets about 128,000 years ago, marking the start of the last warm inter glacial period. That was just when orbital variations would have maximised the amount of sunlight falling on Northern Hemisphere ice sheets. The coincidence had helped convince oceanographers that orbital variations paced the ice ages.

Marine sediments are so difficult to date, a team of oceanographers studying the isotope record had only two or three direct dates for the sediments of the past million years. To fill in the chronology, they simply counted the 'ticks' left in the isotope record by two known periods of orbital clock, 21,000 and 41,000 years long. But a better, more directly dated record tended to confirm the sea-floor chronology. Corals that formed at the ocean's surface when melting ice pushed up the sea level, then died when the ice returned and sea level fell, have left terraces that can be dated by measuring the accumulation of thorium-230 from the decay of uranium.