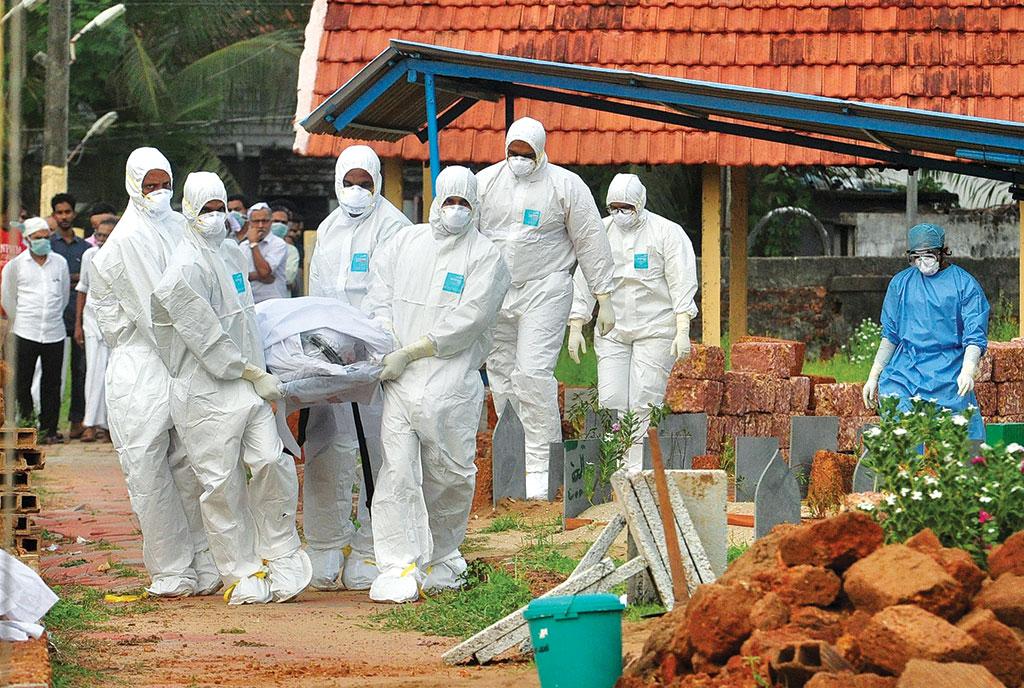 Doctors and relatives wearing protective gear carry the body of a Nipah virus victim, who died on May 24, at a burial ground in Kozhikode, Kerala (Photo: Reuters)

For decades, Kerala basked in the glory of its excellent performance in the human development indices like public health and education, earning praise even from global agencies. But the sudden outbreak of the deadly Nipah virus in a village in the foothills of the Western Ghats in the northern part of the state has exposed the unseemly underbelly of the famed Kerala model of healthcare. The sudden occurrence of the deadly virus has come as a warning sign for the whole country, one of the world’s hotspots in zoonotic diseases.

The Nipah virus has killed 17 people in Kozhikode and Malappuram districts. The virus has made more than 200 people sick and another 1,407 are being monitored to ensure they do not carry the virus as they were in contact with the affected people.

The first patient, 26-year-old Muham mad Sabith, resident of a small village Sooppikkada in Changaroth panchayat near Perambra, Kozhikode, died on May 5 without anyone being wiser to the cause. He had fallen sick early May and was being treated at the taluk hospital in Perambra. But when doctors there failed to treat the high fever and related complications, he was shifted to the Calicut Medical College. The symptoms of Nipah are mostly generic and include encephalitis (inflammation of the brain), fever, headache and disorientation. It was only when his brother, Salih too fell sick two weeks later that doctors suspected Nipah virus and sent blood and serum samples to the Manipal Centre for Virus Research. A total of four people in the family succumbed to Nipah virus and all of those who contracted the disease got it through person-to-person contact in the hospitals where they were being treated. The state machinery did not wake up to the epidemic and put in requisite safeguards to contain the disease.

But once the outbreak was confirmed on May 20, Kerala’s health authorities swung into action and coordinated with the central agencies to contain the threat. The government guest house in Kozhikode city was used for coordination. Central agencies arrived to collect samples, meet people in the affected regions, inspect places where the virus was suspected to have surfaced, besides laying out protocols for treatment of patients and handling burial of the dead.

By the end of May, the National Institute of Virology (NIV) declared that the Nipah outbreak in Kozhikode was under control. However, there is a need for vigil as the virus tends to cause a second outbreak as has been seen in Nipah epidemics in Malaysia and Bangladesh. Rajiv Sadanandan, secretary of health, Kerala government, says they are apprehensive of a second outbreak around December and/or in May next. An assessment of the state’s preparedness to handle such threats is now being undertaken. But, as of now, even the source of the disease, necessary for undertaking control measures, is not known. The first batch of samples collected from Sooppikkada and neigh-bouring places was reported negative. However, it has to be noted that the authorities had failed to collect fruit bats that are known to harbour the virus.

Nipah virus is part of a clutch of emerging pandemics threatening the world because of global warming and environmental pressure. The outbreak is another instance of the virus getting transferred from animals to human beings. There has been a sudden spurt of zoonotic diseases in the past few years. In 2016, the World Health Orga nization highlighted that 75 per cent of new diseases that had affected humans over the past decade had been caused by pathogens originating from an animal or from products of animal origin. B Ekbal, health activist and member of the Kerala State Planning Board, who chaired the committee to prepare the government’s health policy, says the new threats are serious and called for a fresh approach on how to tackle them. He adds the human-animal encounters following extreme levels of encroachment in ecologically fragile regions pose great health hazards for the community. In fact, the region where the Nipah virus first emerged in Malabar happens to be in the foothills of the Western Ghats, which has experienced severe pressures on its ecology.

Despite global alerts about new pandemics, the state authorities failed to monitor the death of Sabith. It took another 13 days and the death of another family member to alert them about the threat. This is despite an active system for prevention and control of zoonotic diseases that has been prepared by the National Centre for Disease Control (NCDC). Under this, these diseases are monitored using the existing surveillance system of Integrated Disease Surveillance Programme (IDSP), which collects data on disease outbreaks across the country on a weekly basis. However, the last report posted on the IDSP site for the 19th week of the year (from May 7 to May 13) clearly shows that the system has failed to catch on to the Nipah epidemic in Kerala.

The reason for this could be that testing facilities for new diseases are not available in sufficient numbers. According to NCDC, Nipah virus is highly contagious and requires a biosafety level (BSL) 4 lab for testing. Only the Pune lab of NIV falls in this category when it comes to human samples. The lab in Manipal, which confirmed the virus, is only a BSL 3 level. However, the Indian Council of Medical Research has been planning to expand the Viral Research and Diagnostic Laboratories’ network since 2013 but a clear timeline for when this would happen is not available. Over six years ago, the government had announced its decision to set up an advanced centre for virology at Alappuzha, but it was never followed up. Now, the government has announced a centre at capital Thiruvananthapuram and plans to start its operations as early as next year.

For the time being, officials say that strict vigil will continue until June 30 to ensure that the threat is completely abated. The government talks about coordinated action for controlling such kind of diseases, but there is ample evidence to show that till the time, active effort is made to preserve the environment, it will be difficult to control them.

(This story was first published in the 16-30th June issue of Down To Earth under the headline 'Caught unawares').