Too hot for Bush

Global warming would affect water availability in the US 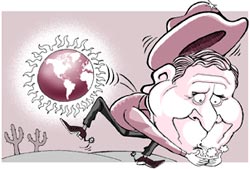 president Bush may now be compelled to reconsider his climate change policy. The most comprehensive study conducted in the us about the potential greenhouse impacts details how major water problems could evolve over the next 50 years in the western parts of the country. Many people have heard about the impacts of global warming, but they typically do not grasp the ramifications of such changes. A degree or so of change in global mean temperature seems harmless enough. Most people are blissfully ignorant about regional or local climate changes that have significant adverse affects worldwide.

The study was conducted by more than two dozens scientists and engineers from organisations like the Scripps Institution of Oceanography, the University of Washington, the us energy department and the us Geological Survey. The scientists began work two years ago, with observations made about the state of the world's oceans -- the vast reservoirs of heat that play a crucial role in climate change. The researchers translated recurrent changes in sea levels and temperatures into future affects on the precipitation and temperatures of the Columbia, Sacramento and Colorado river basins.

Even as a best-case scenario, the study forecasts supplies falling far short of future demands for water. "You'd like there to be some good news in there somewhere, but unfortunately there is not," says Tim Barnett, a research marine physicist at the Scripps Institute.

The scientists found that overall precipitation levels are likely to remain constant in the country, but warmer temperatures mean that what would have fallen as snow will instead come down as rain. Currently, the snow-pack acts as a natural reservoir, storing water through the winter only to melt and release it during the spring and summer when water demand increases. If that precipitation falls as winter rain, however, it will fill rivers and streams at a time of year when water demand is low.
The study further suggests that over the next half century, the rising temperatures will exacerbate problems already seen in the region. For instance:

• In the Columbia river system, residents and industries would have to make a difficult choice between water for summer and hydroelectric power during the fall, or, spring and summer water releases for salmons. In fact, the period for successful salmon reproduction in the Pacific northwest may become so compressed by climate change that some species could cease to exist regardless of any current or future water policy changes.

• The Colorado river reservoir system will also not be able to meet all of the demands placed on it, including water supply for Southern California and the inland Southwest. The reservoir levels will be reduced by more than one-third. The greatest affects will be on lower Colorado river basin states. Lower reservoir levels and flows would also result in reductions in hydropower generation by as much as 40 per cent.

• Even in the central valley of California it will be impossible to meet current water system performance levels. Impacts will be felt in the form of reduced reliability of water supply deliveries, hydropower production and in-stream flows. With less fresh water available, the Sacramento delta could experience a dramatic increase in salinity and subsequent ecosystem disruption.

The study underpins previous findings. The researchers assert that the increasing population would exacerbate the problem. "Indeed, that alone makes for a crisis," says Bill Patzert, a research oceanographer with us-based National Aeronautical and Space Administration. "The problem in the western parts of the us is not climate change alone; it's people using too much water. If nothing happens, we're in trouble. If something happens, it's worse," he says.

In California, the 2003 update to the state water plan -- a document that forecasts water supplies -- will include, for the first time, clauses evolved considering the impact of climate change. "Climate change just adds to the complexity of responding to changes in demand," says Doug Osugi, an engineer in the water-planning branch of the California department of water resources. "One possible way out is to expand the region's network of dams and increase the capacity to store rain runoff," says Barnett. Agrees Pierre Stephens, lead water supply forecaster for the California department of water resources. "Our infrastructure was designed with the current climate in mind, not a different one; so that creates problems," he says. Experts hope that the findings would serve as an eye-opener for those who still want to ignore what's in store for the future.