Unravelling the genetic secrets of the Symbiodinium algae 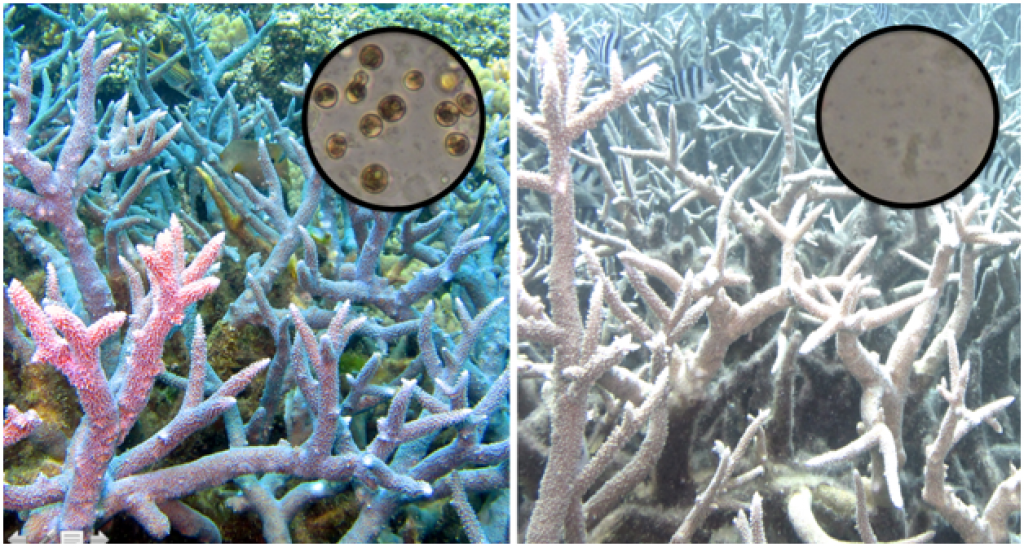 Even though recent developments in technology have enabled us to alleviate some of the damage we have caused to the environment, there still exist some ecosystems, such as the marine ecosystem, waiting for the first glimpse of relief.

Global warming is causing devastation among the more than one million species of plants and animals found in our oceans. Of these, corals are experiencing rapid “coral bleaching” as they expel the symbiotic algae living within them due to the rise in water temperatures. According to many studies, if this problem persists, most of the coral population could be wiped out.

But new research by a team from Australia’s University of New South Wales (UNSW) has identified genes that allow some algae in corals to tolerate higher ocean temperatures than others. "For the first time we have uncovered the mechanism that explains why some algae can withstand higher temperatures and avoid bleaching," says Rachel Levin, the study’s first author and a UNSW PhD student. "We found they can switch on genes to produce proteins that neutralise the toxic chemicals."

To identify the genes responsible for this higher tolerance, the team conducted a heat stress experiment comparing two cultures of algae from locations that differed in the water temperature. They then subjected the Symbiodinium algae to different amounts of heat (stress) and studied the genes that were activated or deactivated over the course of the experiment.

"We found that only the algae from the warmer reef can activate specific types of genes when under heat stress, allowing the algae to counter the damaging effects of the reactive oxygen species (which ultimately lead to coral bleaching)," says Levin.

Another vital finding, according to Madeleine van Oppen of the Australian Institute of Marine Science and the University of Melbourne, was that under stress both types of algae switched their mode of reproduction from asexual to sexual which possibly allowed them to adapt quickly enough to higher temperatures. This can lead to the algae evolving at a much faster rate than naturally anticipated, a “golden ticket” for some corals to survive a bleaching event.

The study is expected to help assess the extent of coral bleaching using these genes as markers. It could also help study methods of gene transfer and artificial selection which would allow heat-resistant genes to be transferred to algae that lack these genes (such as those found in the cooler regions of the barrier reef).

In the following interview, Rachel Levin explains potential implications of the study:

According to you, what are some potential future implications of this study?

Levin: By gaining molecular understanding of how different Symbiodinium respond to heat stress, we gain vital insight into what mechanisms may drive evolution of these algae as the oceans continue to warm. Since the symbiosis between Symbiodinium and corals creates the basis of tropical coral reef ecosystems, the ability of these algae to respond to the changing climate is critical.

Our study is the first to show that some Symbiodinium may be able to activate genes that allow them to acclimate to a certain degree of heat stress. These genes include those for scavenging toxic reactive oxygen species (which induce coral bleaching) and those for sexual recombination to increase genetic diversity (which promotes adaptation). If these thermo-tolerant, adaptable Symbiodinium can successfully re-colonise corals after bleaching events, then corals may be more equipped to resist bleaching in the future as climate change progresses.

Furthermore, if natural re-colonisation of corals by thermo-tolerant Symbiodinium occurs, it may serve as somewhat of a natural test run to consider if we could propagate thermal-tolerant, adaptable Symbiodinium to threatened areas of coral reefs to reduce bleaching. Additionally, by uncovering key genes involved in thermal tolerance, we may be able to survey different areas of reefs using the genes as markers to map out areas that contain thermo-tolerant Symbiodinium and those that do not to improve predictions of which areas of reef are more susceptible to coral bleaching.

Will it be possible to utilise methods of gene transfer to make other varieties of algae heat resistant and therefore less prone to coral bleaching in the future?

This is actually an active area of research currently. A major setback before was that we did not have any understanding of what genes to target for genetic enhancement. Now with the results of our study, we have leads on what genes could be utilised to improve Symbiodinium thermal tolerance. Selective breeding of Symbiodinium as well as corals is also another avenue being explored in hopes of producing Symbiodinium and/or corals that are more equipped to survive climate change.