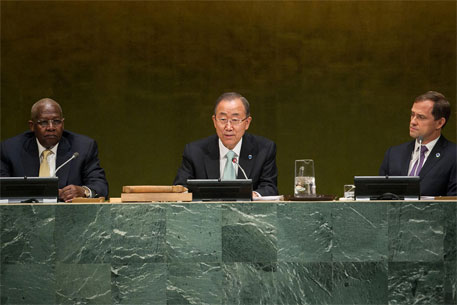 French president Francois Hollande announced that his country will contribute $1 billion to help poor countries adapt to the effects of climate change as he addressed the United Nation's summit. This contribution of France will released over the next few years. South Korean President Park Geun-hye also pledged to contribute up to $100 million to help the United Nations curb climate change. Developing countries have always pitched aggressively in demanding generous and ambitious funds from the developed countries to help them address climate change and in this regard have called for a target total of $15 billion in 2014.

The Green Climate Fund established at COP 16 in Cancun, Mexico, was designated as an operating entity of the financial mechanism of the UNFCCC, in accordance with Article 11 of the Convention. The purpose of the fund is to make a significant and ambitious contribution to the global efforts towards attaining the goals set by the international community to combat climate change. In the context of sustainable development, the fund will promote the paradigm shift towards low-emissions and climate-resilient development pathways by providing support to developing countries to limit or reduce their greenhouse gas emissions and to adapt to the impacts of climate change, taking into account the needs of those developing countries particularly vulnerable to the adverse effects of climate change.

The fund will be guided by the principles and provisions of the Convention, which is equity-based burden sharing and that the developed West must help the developing countries tackle climate change.