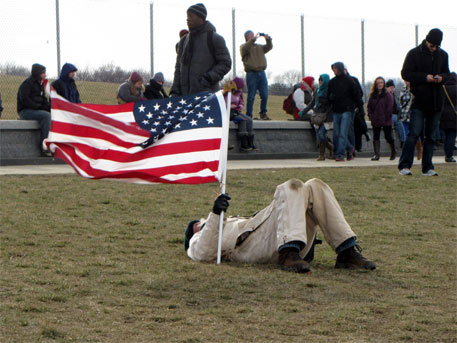 A recent survey to determine the attitude of Americans towards climate change found that almost 40 per cent adults are “concerned believers”—people who believe global warning is induced by human actions and are worried by it.

The survey, carried out by research agency, Gallup, has found that Americans have clustered into three categories over the past one decade in their attitudes. The concerned believers are closely followed by the 36 per cent “mixed middle”—there are more women in this cluster—who are not certain about their beliefs. Then there are the “cool skeptics” (25 per cent) who are not worried about global warming much or at all. The results are from the March 6-9, 2014, environment poll (see graph). 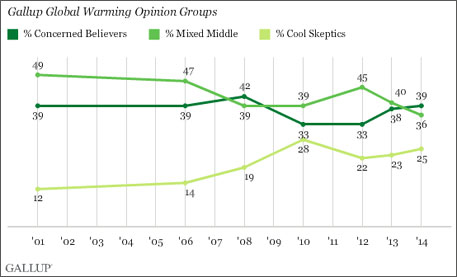 According to the findings, the rate of concerned believers has varied somewhat over the past decade and half, but is currently identical to the earliest estimate in 2001. Over the same period of time, the percentage of cool sceptics has swelled, while the mixed middle—once the largest group—has declined by a few percentage points.

The groupings have been made on the basis of four questions that measure Americans' belief and concerns about human-induced global warming, all of which have been asked together on Gallup's annual Environment survey seven times since 2001.

Polarised views
The opinion poll results say that mindsets of concerned believers and the cool sceptics are highly polarised.

Concerned believers think media reports about global warming are either correct or underestimated, while the sceptics think they are exaggerated.

To top it, two-thirds of concerned believers say global warming will pose a serious threat to their own way of life in the future, while all sceptics disagree.

Those in the middle
Americans in the mixed middle hold combination views. Some say humans are the cause of Earth's warming, but aren't worried about it, while others think global warming is a natural phenomenon, but that it will pose a serious risk in their lifetime. 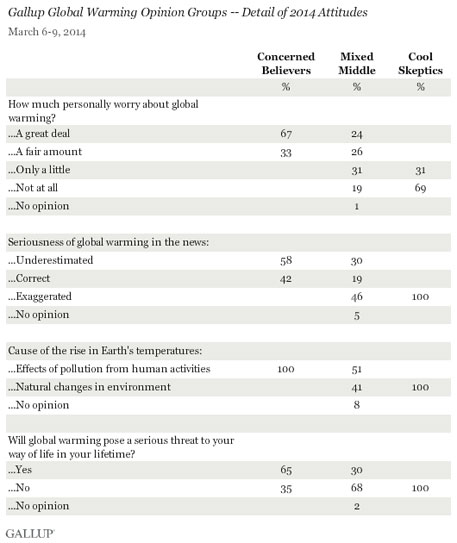