Climate talks in Bonn is about ‘building bridges’ 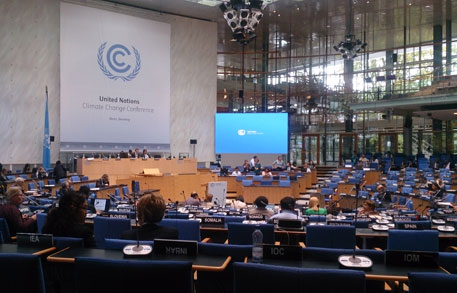 The preparations and final negotiations on the draft text that would form the basis of the new climate deal to be signed in Paris next year began in Bonn on Monday. It is the sixth installment of the second session of the Ad Hoc Working Group on the Durban Platform for Enhanced Action (ADP); the session will conclude on Saturday.

The ADP session began with the comments of one of the co-chairs, Kishan Kumarsingh (Trinidad and Tobago): “Given the urgency on decisions before the 2015 agreement and the tight deadline we have for the same, there has to be consensus regarding the way forward for this session. This ADP session will therefore be addressed as the ‘bridge building session’ to ensure that solutions are driving the conversation.”

The general atmosphere of the session was that there was a positive momentum that needs to be carried forward from the UN Summit in New York  where people’s mobilisation showed that climate change is an important issue and needs to be addressed in an equitable and globally responsible way.

Christiana Figueres, executive secretary of United Nations Framework Convention on Climate Change (UNFCCC), reminded, “this week in Bonn is an opportunity to chart a path towards a clear long-term solution.”

The Bolivian negotiator, speaking on behalf of G77  and China group, the South African negotiator speaking on behalf of the BASIC group (Brazil, South Africa, India and China) and the negotiator for Belize who spoke on behalf of SICA (Central American Integration Systems) agreed that the draft text put forth was a starting point. The delegate from South Africa insisted that it is imperative that the existing commitments (for climate change mitigation) for pre-2020 period by developed countries are met. “It will contribute to the enhancement of trust and confidence that are indispensable for any further agreement.”

Agreement is still needed on the issue of Intended Nationally Determined Contributions (INDCs) on what would be the contributions for each country and how it would be determined. These decisions have to be formalised in Lima since countries have to provide this information early next year.

The coming week would hold two of the remaining technical expert meetings (TEM) on Tuesday and Wednesday on carbon capture, use and storage and non-CO2 greenhouse gases. The technical experts were requested by nations to share policies, practices and technologies and address the necessary finance, technology and capacity building, with a special focus on actions with high mitigation potential. By facilitating interactions between the governments, experts and other stakeholders in the implementation of government policies, they will carry the drive for climate action forward. Since March 2014, TEMs have been conducted on topics of renewable energy, energy efficiency, land use and urban environment.

Manuel Pulgar-Vidal, Peru’s minister of state for environment, said: “It is important that during this week we hold meetings and consult widely among countries and groups, with the aim of having substantive results, especially because this is our last opportunity before Lima.’